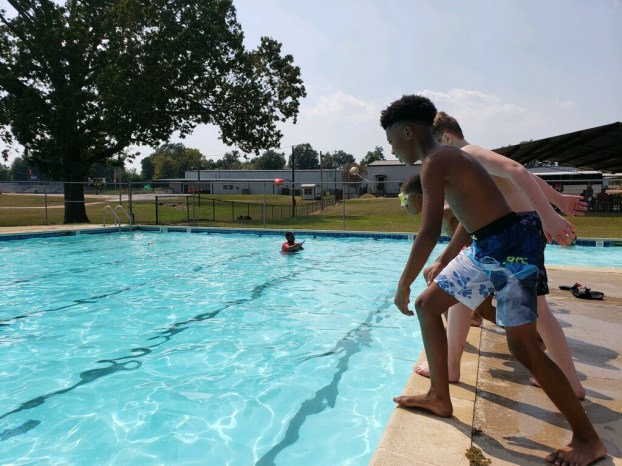 The Dart: Saturday was perfect day for a pool party

NATCHEZ — McLaurin Elementary School fifth-grader Matthew Anderson beat the heat Saturday afternoon in the best way possible while dozens of his friends watched him do it.

Just two summers ago, Matthew couldn’t swim, said Matthew’s mother Mary Ann Anderson. However, when The Dart landed near Adams County Christian School Saturday afternoon Matthew and his friends all lined up at the edge of the deep end of the pool and jumped right in without a drop of fear.

Birthday balloons decorated the fence around a swimming pool that was filled with Matthew’s friends and family members who were there to celebrate his birthday party.

Matthew just turned 11 years old Thursday, Mary Ann said, and only wanted one thing for his birthday for the past few years.

Though neither Mary Ann nor her son were strong swimmers, this year his birthday wish finally came true, she said.

“We’ve invited cousins and friends and classmates — just everyone,” Mary Ann said. “… He has wanted to do a pool party for a couple of years now and I finally gave in. … As far as a toy, he loves racecars and big trucks — but believe it or not the only gift he wanted was a pool party, so that’s how we got here.”

“I was scared but she really helped me a lot,” Mary Ann said.

Mason, who has managed the pool for the past decade, said Matthew caught on to the lessons quickly with help from certified lifeguards.

“He has done very well,” Mason said. “He was a little scared of the 12-foot end, but soon we had him swimming all across the pool — even in the 12-foot end — doing overarm strokes and regular strokes.”

Matthew said he got everything he wished for Saturday when he celebrated not only his birthday but also his newfound freedom in the pool as he dived into the deep end and splashed around the water without holding on to the edge.

“Yes, ma’am,” Matthew said of getting his birthday wish. “I’m having a lot of fun.”