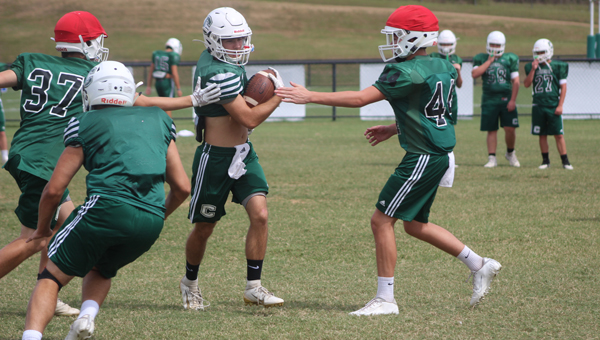 From left, Jag Gilfoil tags Ben White along with Jake Maples during football practice on Wednesday. The Cathedral Green Wave will travel to Brookhaven Academy on Friday for another District 4 match up. (Patrick Murphy, The Natchez Democrat)

Green Wave will travel to Brookhaven on Friday

NATCHEZ — After winning two straight home games against two District 4 opponents, the Cathedral Green Wave will travel to Brookhaven Academy Cougars on Friday for another District 4 match up.

In the last two games, the Green Wave’s defense has not allowed any points. The defense also scored a touchdown on a fumble recovery and a safety in the 37-0 win over River Oaks High Mustangs. Green Wave head coach Chuck Darbonne said the Green Waves played a bit harder in last Friday’s game than in other games.

“I thought we got a boost from the team with JC Harris (running back) being healthy, being able to play a full game,” Darbonne said. “I think he gave us an extra boost of energy to see him do some kind of things he can do.”

Two players who stood out from the game against River Oaks were Bryson Moore and K.J. Washington. Moore is a defensive end on defense while Washington is a running back. On defense, Moore had one solo tackle and was in on two other tackles.

“I think it was pretty good,” Moore said of the defense. “We stopped them from scoring. We still have to work harder.”

In last Friday’s game, Washington rushed for 32 yards and on defense he obtained one interception and two assists. Washington’s interception would lead to a Green Wave touchdown. In practices this week, Washington said he has been focusing on his technique.

“My technique is to move fast,” Washington said. “I just drive for the first down.”

The Brookhaven Academy Cougars (3-1) come into Friday’s game off of a win against Centreville Academy, 24-20. Friday’s game will be the Cougars first District 4 game of the season.

“We have played them every year since I have been here, both in junior-high and high school,” Darbonne said, of the rivalry between Cathedral and Brookhaven Academy. “There’s a lot of familiarity between the two programs. Our kids know each other from playing in all sports. Our players are looking forward to it.”

The kickoff is set for 7 p.m. Friday at Brookhaven Academy.