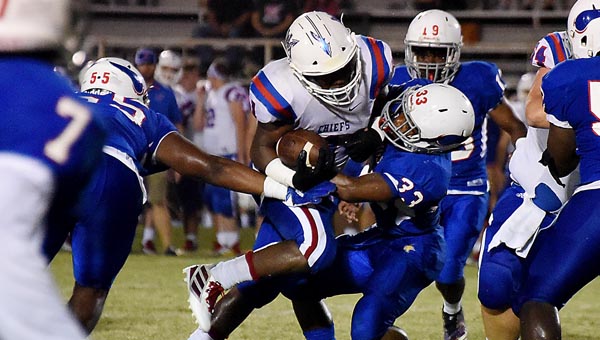 “The big thing for us is we always want to run the ball effectively,” Chiefs Head Coach Matt Middleton said about his running backs’ performance in the game. “We have three running backs that were very electric and what a heck of a job by the offensive line, too.”

The Chiefs began their opening drive with four running plays. Running back Tobias Owens rushed 73 yards in the opening drive. Owens would run for a 66-yard touchdown for the Chiefs first score. Owens said he was tired after his rushing touchdown.

“My touchdown run was pretty exciting,” Owens said. “The linemen got their blocks and got the people they were supposed to get. They allowed me to score the touchdown. I was proud of them.”

The running game for the Vikings picked up in the second quarter. Running back Cam’ron Randall rushed for 36 yards on the Vikings’ third possession of the game. Randall finished the third possession with a 1-yard touchdown. Faircloth said Randall fought hard running the ball.

“He had some great runs for us, and we were able to catch the Chiefs off guard,” Faircloth said. “Randall has some great vision, hit some holes that really weren’t there and opened them up for himself. He really did great.”

The Chiefs defense also came up huge. Chiefs’ linebacker Dawson Hagen picked up three of the five interceptions by the Chiefs. Some of those would stop the Vikings’ possessions in the red zone. The defense also blocked the Vikings punt and ran it for a touchdown. Hagen said having three interceptions in a game was crazy for him.

“Our defense is pretty good this year while last year we struggled,” Hagen said. “I think we handled the Vikings offense pretty well.”

The Chiefs (3-0) will continue their three-game winning streak into a home game against Lakeside High School. For the Vikings (1-2) will be on the road next Friday night against Rayville High School Hornets.