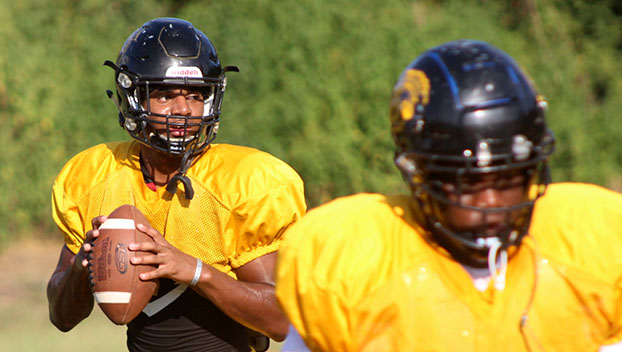 Quarterback Kobe Dillon attempts to throw to a receiver in practice on Wednesday at Ferriday High School. (Patrick Murphy / The Natchez Democrat)

Ferriday — A season ago the Ferriday High School Trojans went 6-0 in Class 2A District 2 play and finished in the semifinals of the Louisiana High School Athletics Association Prep Classic.

On Friday, the Trojans begin district play this season when they host Rayville High School Hornets.

“We want to make sure we focus in harder and prepare a little bit harder for these district games,” Smith said. “We want to use that momentum from winning the district two years in a row and carry it through the season. We feel like we’re putting ourselves in the best situation to be successful.”

Running back Kobe Johnson ran the ball six times for 67 yards and rushed for a touchdown. Smith said these two players played with a little bit more gas than other players.

At practices this week, Dillon said he’s focusing on bettering his craft of throwing the ball. In the game against Sicily Island, he completed three of 13 passes, passed for a touchdown and threw an interception. As a whole, Smith said he wants the Trojans to focus on perfecting the little things.

“Our motto is alignment, assignment and execution,” Smith said. “We’re going to make sure we line up right, know our assignments so we can carry it out and make plays. We need to be in the right position to make plays.”

The Hornets (0-3) come into this game on a three-game losing streak. In last Friday’s game, the Hornets lost to Union Parish High School, 47-6. The head coach for the Hornets is Joseph Purvis. Purvis was the Defensive Coordinator last season at Franklin Parish, a team Smith said the Trojans were familiar in playing against.

“The Hornets are a very talented program and they were able to win a lot of district games in the past,” Smith said. “We’re familiar with the head coach because we have played against him for the past two years. We kind of expect some things out of him with different alignments and the philosophy they’re doing. We think we have a good shot to come out and have a good night on Friday.”

The game is set to start at 7 p.m. Friday at Ferriday High School.