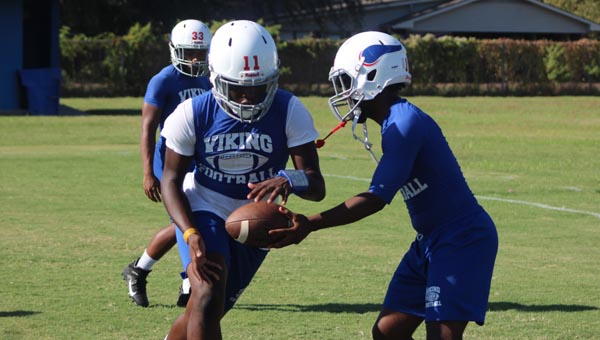 Dylan Boxley hands the ball off to Christian Davis during practice on Thursday. The Vidalia Vikings High School are hosting Caldwell Parish in the last game before District play. (Patrick Murphy, The Natchez Democrat)

By PATRICK MURPHY
The Natchez Democrat

VIDALIA — The Vidalia High Vikings face the Caldwell Parish Spartans on Friday in the Vikings’ last game before district play next week.

Last week and this week, the Vikings have faced schools who are in Class 5A and Class 3A, respectively.

“I strongly believe the stronger regular season you have the easier the playoffs and district will be for you,” Vikings head coach Rob Faircloth said about facing schools in larger classes. “It’s like lifting weights. The lightweights get easier. We’re lifting some heavy weights this year. Caldwell might be the heaviest weights we lift.”

In last week’s game against Class 5A West Ouachita, the Vikings turned the ball over eight times. Faircloth said in Friday’s game against the Spartans.

The Vikings need to keep from turning the ball over.

After last week’s 20-7 win against Winnfield High School, Caldwell Parish (3-0) will come into Friday’s game on a three-game winning streak.

Faircloth said Friday’s game against the Spartans will be tough.

“They’re possibly one of the best teams on our schedule this year,” Faircloth said. “I talked to some of the coaches who have already faced Caldwell and they said the Spartans have everybody back from last year’s team.”

One of the players who stood out in the Vikings 45-12 loss to West Ouachita was Cam’Ron Randall.

Randall had 14 carries, rushed for 103 yards and rushed for a touchdown.

This week at practices, Randall said he has personally watched film, studied Caldwell’s key players and studied his plays.

“I have also tried to get my team disciplined, tried to get them focused and ready to play against Caldwell,” Randall said.

The game starts at 7 p.m. Friday at Vidalia High School.