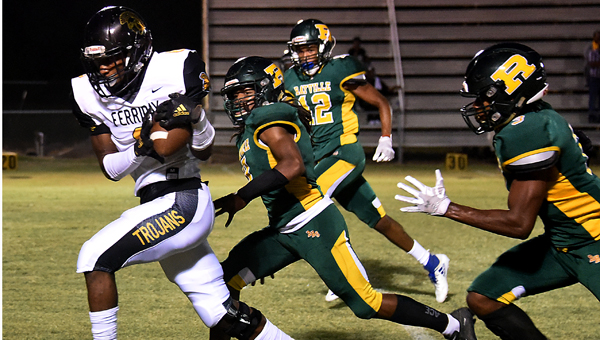 FERRIDAY — Byron Milligan led Ferriday High School’s rushing game with 178 yards and four touchdowns on just 10 carries as the Trojans cruised to a 50-0 win over the Rayville High School Hornets Friday night at Melz Field in the LHSAA District 2-2A opener for both teams.

Two of Milligan’s touchdown runs came in the first quarter as Ferriday, ranked No. 6 in the latest LSWA Class 2A poll, jumped out to a 22-0 lead by quarter’s end and never looked back.

“We want to run the ball to take control of the game and be physical and that’s what we did tonight,” Trojans head coach Stanley Smith said. “We came out and started fast. We scored on back-to-back drives.”

The Trojans scored 22 more points in the second quarter for a commanding 44-0 lead at halftime over an overmatched Rayville team. Ferriday reached the 50-point mark late in the third quarter on a seven-yard touchdown pass from Kobe Dillon to Elijah White.

“Defensively, it was a collective effort tonight,” Smith said. “We have a few things to work on. But overall, it was a good night.”

By PATRICK MURPHY The Natchez Democrat NATCHEZ — In the first Region 3-5A game of the season, the Natchez High... read more