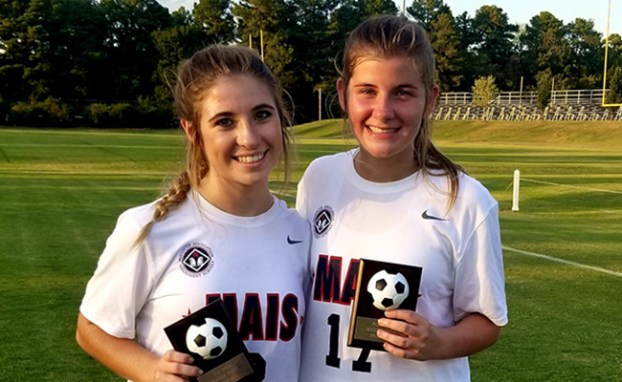 Olivia Moore (left) stands with Faith Anne Brown with the trophies they received at the Midsouth Association of Independent Schools. (Photo Submitted)

Moore and Faith Anne Brown were both on the White team during the All-Star game against the Blue team. The White Team defeated the Blue Team, 5-2.

“For my team, she was more of a midfielder or a striker,” Hogue said about Moore playing at her new position. “She played this position awesomely. She had no issues at all. She helped control the midfield and was pivotal in a couple of takeaways. It helped in scoring goals for the White Team.”

In the third portion of the All-Star game, Brown and Moore were able to play at the same time. Brown was a striker in the game while Moore was a holding midfielder.

Hogue said both Brown and Moore played well in the game, which was the last soccer match for both players.

“It was bittersweet to watch them play in their last soccer match,” Hogue said. “I was beaming with pride. I couldn’t replace these girls. I don’t know who can step up and fill those shoes.”

FERRIDAY — After starting the season on a four-game losing streak, the Delta Charter Storm won their first game of... read more