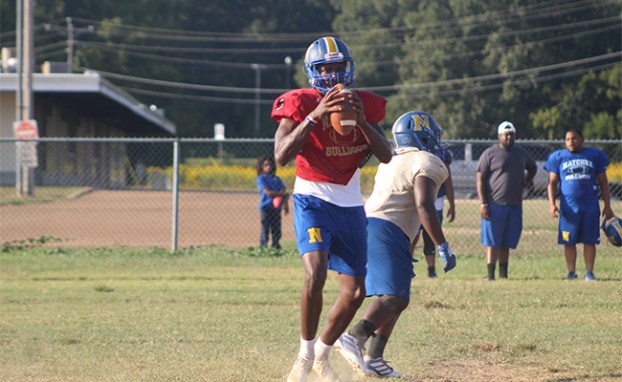 The Bulldogs will travel on Friday to Region 3-5A opponent Forest Hill High School Patriots.

“Every game from this point on is important. That’s the way we look at it,” Bulldogs Head Coach Roy Rigsby said about winning this game against the Patriots. “The situation that we’re in with the loss to Laurel, we’re basically in playoff mode already. We need to win at all costs.”

Rigsby said the Patriots are a dangerous team with a quarterback that can both pass and move in the pocket and a wide receiver that could be one of the best receivers in the district.

To beat the Patriots, Rigsby said the Bulldogs need to win the turnover battle and be physical.

In last week’s 48-14 loss against Laurel High School, the Bulldogs gave up 14 points off of their turnovers. The two turnovers for touchdowns by the Golden Tornadoes were by a fumble in the end zone and a Kyreek Murray interception for a touchdown. Rigsby said those things can not happen against the Patriots.

In practices this week, Rigsby said he has made some personnel changes and has created different schemes.

“We came in to practices this week and made some corrections from the Laurel game,” Rigsby said about making changes for Friday’s game against the Patriots. “When you look at the quality of ball that Laurel brings to the table, it’s a good quality of ball. We believe we played a good game in the first quarter. But against a team like Laurel, you have to play consistently for all four quarters.”

The game is set to start at 7 p.m. Friday at Forest Hill High School in Jackson.