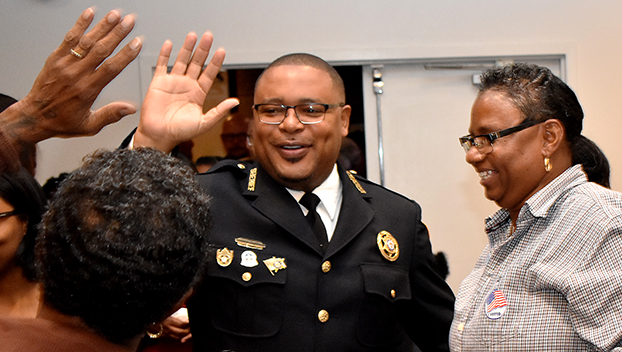 Sheriff Travis Patten arrives to a victory party held for him at Magnolia Bluff Casino Hotel in Natchez after being declared the winner of the Adams County Sheriff’s race. (Scott Hawkins / The Natchez Democrat)

“I’ve got to give Adam Kirk credit,” Patten told the crowd of his main opponent in the race. “He was the first guy to call and congratulate me on the victory.”

Both Kirk and Seyfarth ran as independents and Patten is a Democrat.

Patten said he admires Kirk who ran a clean race.

“I told Adam even though the race is over, we have a lot more work to do in this community,” Patten said. “He agreed.”

Patten thanked his family, including his daughter, Makala, whose 15th birthday was Tuesday, and his extended family of the Adams County Sheriff’s Office employees.

“So many of y’all kept the Team Patten from going in the ditches,” Patten said. “You don’t know what made of until you’re tested. You’ve all been truly battle tested and you’ve come out smelling like gold roses.”