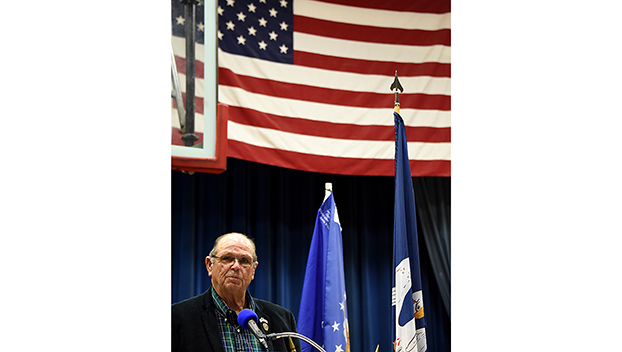 Doug McCallister from Point Man International was one of the guest speakers at the Vidalia High School Veterans Day program Friday morning. McCallister talked about future plans for a memorial to veterans in Vidalia. (Ben Hillyer / The Natchez Democrat)

“We hear a lot in the news these days about walls, and it is my privilege to share information about a wall in our community that serves a vastly different purpose than the wall we hear about on the national news,” McCallister said.

Current plans are for the memorial to be built on the Vidalia Riverfront. The exact location has not been determined. The local memorial will be similar to the Vietnam Memorial in Washington, D.C., and will be 272-feet long and 8-feet tall.

“Not only is it going to be a wall. It is going to be a tribute — all-inclusive, that will encompass the men and women of all armed services, who have not only served in Vietnam, but in all of the Gulf Wars.”

Since the wall’s conception, McCallister has been working with the town of Vidalia on the details of the project.

McCallister said he intends to make a greater announcement about the project in the near future.

McCallister said some people have wondered how much the memorial will cost.

“How much will it cost? A lot,” McCallister said.

In 2018, McCallister said the wall would cost roughly $300,000 to complete. That may change since the scope of the project has broadened, McCallister suggested.

Even though it will cost a lot of money, McCallister said he is confident the wall will be built.

“What we do know and what we are comfortable with is that we can make it happen. It will happen,” McCallister said.

Back from the Grave: Angel stories delight crowds

On the first night of Angels on the Bluff, some of the Natchez City Cemetery’s best stories came back from... read more