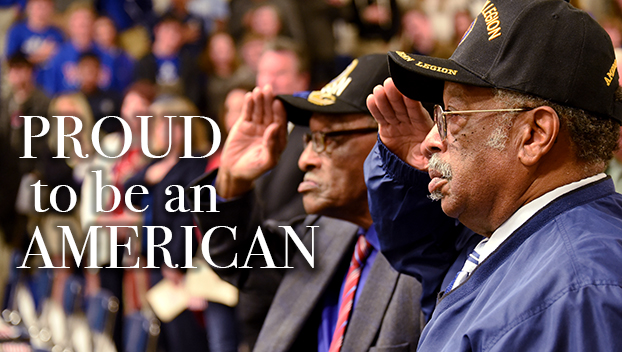 VIDALIA — Veteran Nathaniel Williams’ eyes filled with pride — and maybe a few tears — Friday morning when he heard the words to the song “God Bless the USA.”

Williams sat on the front row with his father and veteran Frank Williams during the annual Vidalia High School Veterans Day program.

“I wouldn’t sit anywhere else,” Nathaniel said referring to being next to his father, who served in the U.S. Navy during World War II.

Nathaniel served in the U.S. Army from 1966 to 1969. He joined the military right out of high school.

“I was raised in a military family,” Nathaniel said. “Like my father and brothers, I wanted to serve my country.”

At 93 years old, Frank is one of the few area World War II veterans around, Nathaniel said of his father.

Frank is the commander of VFW Post 590 and Nathaniel serves as the post’s secretary. Nathaniel has served as a VFW District Vice Commander.

Nathaniel said two other brothers were also in the military — an older brother who served in the Vietnam War and a younger brother who was staitioned in Saudi Arabia and Iraq during the Gulf War.

“We were a military family. I also had several cousins who served,” Nathaniel said.

During his time in the army, Nathaniel was stationed in Fort Polk, Louisiana, Fort Bragg, North Carolina, Fort Jackson, South Carolina, and in Germany.

Stationed in Europe during the Vietnam War, William experienced a time when tensions were high. The Berlin Wall had been built in 1961 and activity in Eastern European countries had troops under high alert while he was stationed in Germany.

“I didn’t like the cold weather, but I got used to it,” Nathaniel said.

Attending Veterans Day programs, like the one hosted by Vidalia High School, is very important to Nathaniel.

“I attend every program I can get to,” Nathaniel said. “All they have to do is call and let me know when and where it is, and I will be there.”

Nathaniel said he has become such a regular at area Veterans Day programs that people miss him when he is absent.

“They tell me how much they missed me being there,” Nathaniel said.

Programs like the one on Friday, Nathaniel said, serve as a reminder to students the sacrifices that have been made so they can enjoy everything the country offers.

“Sometimes they do not understand. Freedom is not free,” Nathaniel said. “You have to fight for it. You have to stand up for what you believe.”

Nathaniel said he was encouraged by the number of students in the high school who stood up Friday as having relatives in their family who serve or have served in the military.

Nathaniel said many of those students know what it is to live while a parent is away serving the country.

“They understand the sacrifices that are being made,” Nathaniel said.

Nathaniel said the words that echoed in the Vidalia High School gymnasium sum up Veterans Day for him.

“I am proud to be an American, because at least I know I am free,” Nathaniel said. “We have freedoms many people in this world never have.

“I enjoyed the program and am planning on being back next year,” Nathaniel said.