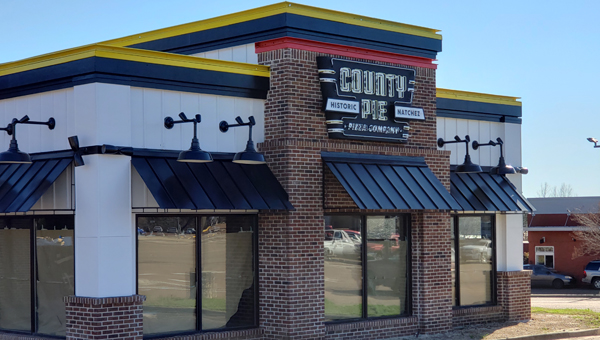 Owners of Roux 61 are updating the former Ruby Tuesday building on Seargent S. Prentiss Drive with plans to open as County Pie a pizza place. (Sabrina Robertson, The Natchez Democrat)

NATCHEZ — Keeping news secret about the opening of a restaurant in Natchez may be a bit like keeping people from snatching a slice of hot pizza.

Especially if you already own one of the area’s most popular restaurants.

Last week, work crews put up a metal and neon sign with the words “County Pie Pizza Company” on the front of the former Ruby Tuesday in front of the Tracetown Shopping Center.

The local Ruby Tuesday, part of a national chain, abruptly closed its doors at the end of April as part of series of closures of more than 400 restaurants across the country.

Construction crews have been transforming the exterior of the building on Seargent Prentiss Drive, wrapping parts of the structure in brick and painting the cornice in contrasting colors of yellow, black and red.

But what is happening inside the old store has been kept under wraps by the restaurant’s new owners.

Brian Lees, one the people involved in the project, said he is not ready to make an announcement about the restaurant. Brian is part of the Lees family that owns Roux 61, one of the area’s most popular restaurants.

A Facebook page created for County Pie at www.facebook.com/countypie/  describes the new restaurant as a “fresh pizza joint comin’ in HOT to Historic Natchez,” but does not give an exact date when the restaurant will open.

The Facebook page has already piqued the interest of many people, garnering more than 250 likes. More than 280 people are following the social media page.

Other than bright yellow and black graphics of road signs with pizza related sayings, the Facebook page gives few clues as to what awaits local diners.

“93% of Americans that eat pizza do so once a month. We think we can do better than that,” the owners posted on Sept. 10.

Local pizza lovers will have to wait a little longer to satisfy those once a month cravings. How long, remains to be seen.

JACKSON (AP) — All state-run and private prisons in Mississippi have been put on lockdown as officials investigate a conflict... read more