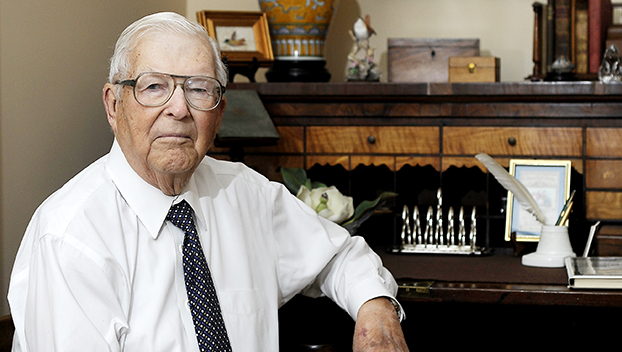 Dr. Godfrey being remembered for long legacy of kindness, caring

NATCHEZ — William “Bill” Edward Godfrey II, M.D., a longtime Natchez obstetrician and gynecologist who died Thursday at the age of 95, is remembered by friends and family as a man of good faith, good business and a good friend to those who knew him.

Godfrey practiced delivery and surgeries in Natchez beginning in 1960 through 1996 and continued office appointments until he was 89 years old, said his son, Sam Godfrey.

“It’s hard to say how remarkably blessed we are to have had him in our lives,” Sam Godfrey said. “He didn’t just love his family. He absolutely cared for everybody, was kind and generous and was a part of that great generation that came out of the Great Depression. He had so many admirable qualities about him. He left us all a wonderful legacy of kindness to follow.”

Sam Godfrey said his dad probably delivered 8,000 to 9,000 babies throughout his career and enjoyed playing tennis and golf, and hunting and fishing in his spare time. He loved learning and doing things that kept his mind busy, Sam Godfrey said.

“In the 1960s and ’70s, Natchez had a vibrant, thriving medical community,” Iles said. “There was a close fraternity of physicians, and also a few women, who deeply respected one another. Most of those docs have passed on now, but Bill Godfrey was one of the bright lights of that generation. … Dad always spoke of Dr. Godfrey with the utmost respect. He was devoted to his calling, and socially he was a gentleman of the old school. He used to let us kids fish in his ponds sometimes. He delivered my daughter Madeline, and countless other Natchez babies who are now grown. His passing will be deeply felt in this city, but most deeply by his former patients.”

Thomas Purvis Jr., M.D., a retired obstetrician and gynecologist, said he practiced with Godfrey for approximately 60 years starting in 1968.

“We both delivered 7,000 Natchez babies apiece,” Purvis said. “He was very likeable, extremely intelligent, caring and his patients loved him. He was also a good businessman and very generous to me as a partner.”

After Purvis and Godfrey retired, Purvis said they and their other doctor friends continued to play golf together for years — about twice a week as the weather permitted.

“We had a long and good relationship since day one,” Purvis said. “He came to Natchez a long time before me and he took me in.”

Duncan “Frank” Guedon, M.D., said he joined Purvis and Godfrey fresh out of his residency in 1995 and learned a lot from them during the first five years of his career.

“I learned more from Dr. Godfrey and Dr. Purvis than I did during all four years of my residency as far as surgeries are concerned,” Guedon said. “Dr. Godfrey was an excellent surgeon and an excellent physician and a genius of a guy.”

Guedon said Godfrey was always whistling and “just being a happy-go-lucky kind of guy” and a very pleasant person to work with.

Guedon recalled with a laugh how Godfrey would correct him during operations.

“He would make a humming noise during surgery if I was about to place a stitch somewhere or put a clamp on something I wasn’t supposed to. … He was very helpful and a great teacher. I couldn’t ask for a better partner, especially being a young guy fresh out of residency.”

A memorial service celebrating Godfrey’s life will be noon Saturday at the First Presbyterian Church in Natchez with the Rev. Joan Gandy officiating. Visitation will be in Stratton Chapel from 10 a.m. until service time.

Local radio stations to be sold

NATCHEZ — Diana Nutter of Natchez, one of the current owners of the WMIS and WTYJ radio stations, said her... read more