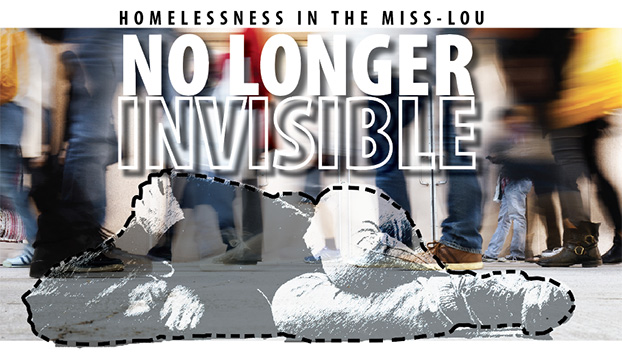 Need for homeless shelter exists; does community really want one?

NATCHEZ — Members of the homeless community are often invisible in the Miss-Lou.

Next time you pass an empty wooded lot behind a retail area or fast food joint, however, if you look a little closer, you might find a homeless camp behind the tree row.

Carolyn Myers, founder and CEO of Seeds of Change, a 501 (c)(3) organization that operates a food bank and helps feed needy people and veterans in the Miss-Lou, said she meets with the homeless population in Natchez on a regular basis.

“I go out and donate to them, give them water, food, blankets, T-shirts, socks, all of that,” Myers said. “I go and sit and talk to them and find out what they need, and a lot of times I’ll say, ‘Do you have a coat? Do you have any blankets? And the other day, I gave away blankets and T-shirts.”

Myers said she estimates that Natchez has a homeless population of 15 to 20 individuals.

While homeless individuals are largely unseen in Miss-Lou, on the recent cold night of Dec. 19, a man believed to have been homeless showed up at the Adams County Sheriff’s Office asking if he could stay in the jail to keep warm.

After sheriff’s deputies explained he could not stay in the jail due to liability issues, the man broke the plate glass windows on the front of the sheriff’s office on State Street and also broke windows on the Adams County Courthouse across the street in order to get arrested and be put into jail.

At the time, Adams County Sheriff Travis Patten said the episode illustrated the need for a homeless shelter in the area.

Adams County has a safe room that in certain emergencies can be opened for temporary shelter, said Robert Bradford Sr., director of Adams County Emergency Management Agency, but the shelter is not currently staffed or equipped to open temporarily for cold nights that are not below freezing, such as the night of Dec. 19, which had a low of 41 degrees.

In 2018, Natchez and Adams County created an exploratory committee made up of community leaders, including Bradford, to study the possibility of creating a homeless shelter or temporary emergency shelter.

After a few meetings, however, the group quit meeting.

“It fell by the wayside because with something like that you have to have the whole community to buy in on that,” Bradford said. “We found some areas we need to work on such as emergency shelters. Nothing long term just emergency shelters, like a warming shelter or for somebody who gets burned out of their house to have a place they can go.”

Myers said she is in the process of purchasing a house on Claiborne Street in Natchez that she hopes to operate as a temporary homeless shelter.

Myers said her proposal to the Planning and Zoning Commission was accepted for a residential personal care home facility. Still, she is seeking to get a variance from the Natchez Mayor and Board of Aldermen to operate as a homeless shelter.

Myers said Riccardo Giani, Natchez Planning and Zoning director, said the property she is purchasing on Claiborne Street is not zoned for a homeless shelter.

“I asked him about the special exception, and he said it would have to go before the board (of aldermen),” Myers said. “It has to be called a residential personal care home.”

Myers said she is on the Board of Aldermen’s Jan. 28 agenda to ask for a special exception to operate a homeless shelter in the Claiborne Street facility.

“We are not asking the city for any funding because I have applied for a grant,” Myers said, adding she also has raised money from events, such as a bikers’ weekend to help fund the project. “I have people already waiting to come and help me renovate the place. We want this as a temporary homeless shelter. We are not calling it a homeless shelter. It is called My Father’s House.”

Myers said a personal residential care facility has strict regulations through the Mississippi Department of Health.

Natchez city officials said Myers’ proposal for a homeless shelter in the Claiborne Street neighborhood is meeting resistance from neighbors.

“Based on the consensus of the community, they do not want it because of the safety issues in the community,” said Felicia Bridgewater-Irving, Ward 4 alderwoman, whose ward includes Claiborne Street. “It is a good gesture, one that is needed but not in that area. That’s the feedback that I have.”

Irving said she canvassed the neighborhood and has written statements of opposition form approximately 15 residents of Claiborne Street.

Irving said she is not personally opposed to the idea of a homeless shelter in Natchez.

“If they are not accepting it in their area, then there is nothing that I can do except respect the decision of the residents who live there,” Irving said.

“I don’t want a homeless shelter in the community unless there is a plan and a program that can help individuals to get on their feet,” Grennell said. “You’ve got to have that in place. If not, you will create a dependency type of shelter. When you talk about a homeless shelter, you have to have a complete comprehensive plan that will have programs in it to help individuals to get on their feet.”

Glennese Smith Lollis, CEO of Great Motivation Starts with Self, which goes by the acronym GMSS, pronounced “Gyms,” a 501 (c)(3), plans to open a residential personal care home on Bowman Street for victims of domestic violence.

Lollis said she hopes to make the shelter available to homeless people as well.

The Natchez Department of Planning and Zoning approved her application for a residential personal care home on Dec. 23.

“Upon opening a shelter for families of domestic violence, because homelessness was a great need, too, I would allow the homeless to come by and get a meal and a shower daily,” Lollis said. “They would have to sign in and out and they could shower once daily, but the families of domestic violence can stay from seven to 14 days until they can find a safe place to stay instead of going back home.”

Lollis said she has been active in helping needy families in the community and received her 501 (c)(3) last May.

“The organization also hopes to help the families and individuals find permanent safe locations to live,” Lollis said. “The Rev. K.E. Stanton has donated a house and property to the organization. The project will honor John and Thelma Newman.”

Lollis said renovations have begun and she has spent more than $15,000 so far but hopes to raise another $20,000 to complete the project that would accommodate 21 to 23 people.

Lollis said she is planning more fundraisers, including a walk along the bluffs tentatively set for March.

Bradford said the community must eventually deal with the need for a shelter.

“Something is better than nothing,” Bradford said. “Sometimes we kick the can down the road, but we have to face the issue one day, either this year or next year. Something is going to have to be done to help out as much as we can. Everybody has great ideas, but your ideas are only so great if you don’t get the support from the community, also the leaders.”

Bradford said he would like to see a group reconsider the issue.

“We just need to get to the table, see where we are and do a systematic approach,” Bradford said. “Why do we need it? How are we going to fund it? Is it going to be beneficial to everybody? Stuff like that. Who is going to manage it? How much support is put into it?”

Irving said after stories of the homeless man getting arrested went out last month, a consultant from Greensboro, North Carolina, reached out to Grennell, Bradford, and her, offering assistance in planning a homeless shelter.

Irving said she is considering the offer.