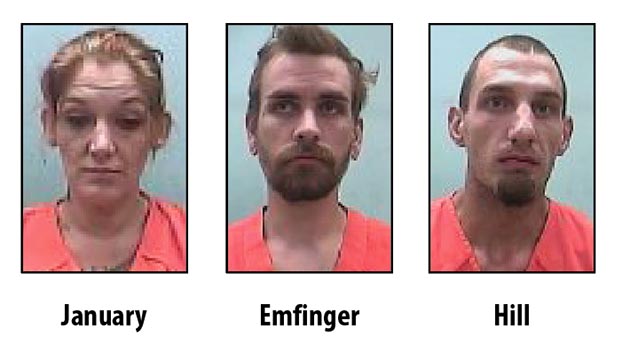 3 charged in burglary of storage unit

NATCHEZ — Three people face charges of burglary of a storage unit after Adams County Sheriff’s Deputies acted on a tip and said they found several items that had been reported stolen from a storage unit.

Juanita January, 37, and Joshua Hill, 26, both of Natchez, and Atreyu Emfinger, 27, of Vidalia, each face charges of burglary of a storage unit, said Lt. Cal Green of the Adams County Sheriff’s Office.

“Deputies had information that a Juanita January was possibly involved in the burglary of some storage units,” Green said. “They went to the location where she is supposed to be living on North Union Street (on Friday evening), saw her with other people getting out of vehicle and made contact with her.”

During the investigation, Green said deputies found Hill in the house on North Union Street.

“They basically confessed that they had done it,” Green said.

The investigation led to Emfinger’s residence at Hammett Addition in Vidalia, Green said, where deputies said they recovered more items that had been stolen from the storage unit.

Emfinger had an outstanding charge of contempt of court for failure to appear on a traffic violation, Green said.

“There is probably going to be more than one charge, because there could be more than one unit broken into,” Green said. “Investigators are still trying to match up recovered items to the owners.”