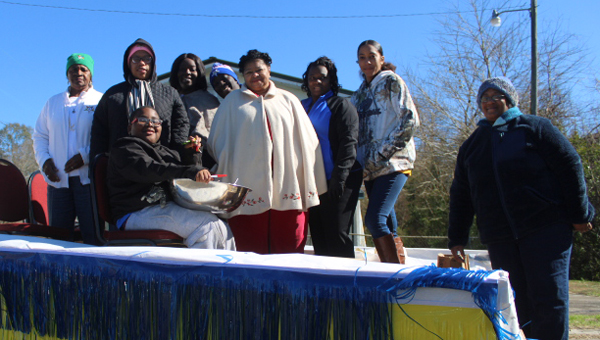 NATCHEZ — For the past four years, members of the Adah Grand Chapter Order of the Eastern Star Masonic organization have prepared a float for the Martin Luther King Jr. Day parade in Natchez. This year was no exception.

When The Dart landed near Cathedral High School on Monday afternoon, Frances Bailey, who is the Associate Grand Major Worthy of the Adah Grand Chapter, was helping decorate the white float for the Martin Luther King Jr. Day parade.

On the left side of the float, were yellow, blue, red, white and green streamers. Bailey said the streamers represent the colors of the Adah Grand Chapter.

Before having a float in the parade, Bailey said the men used to walk. The men are part of the MWWTW Grant Jr. Grand Lodge.

“Since we have aged and some of us couldn’t walk, we decided to put a float in the parade,” Bailey said.

Bailey said she loves being part of the parade and being involved in it with the organization and sharing it with people she knows.

“It shows how we celebrate Dr. Martin Luther King Jr.’s dream and what the cause was all about,” Bailey said. “The cause was about bringing people together and being united.”