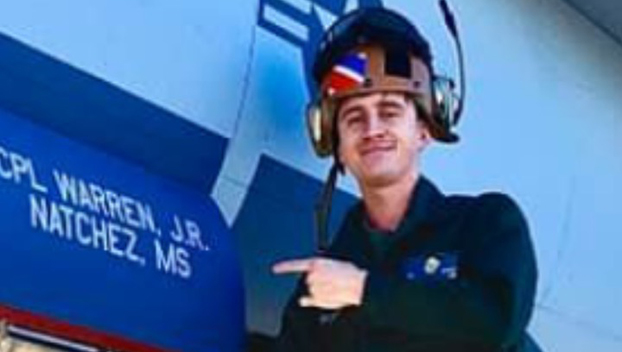 Cpl. Joshua Warren Jr., a powerline mechanic and 2015 Vidalia High School graduate, is currently stationed at the Marine Corps Air Station in Beaufort, South Carolina, and became one of 10 or 12 plane captains at his station, he said.

Warren said the jet was marked with his name and the name of his hometown, Natchez, as a token of completing his training.

Plane captains are tasked with being the sole person able to communicate and guide pilots from the ground using only hand and arm signals before takeoffs and during landings, Warren said.

“As the plane captain, you are the only one communicating with the pilot using hand and arm signals,” Warren said. “You can’t hear anything because you have earmuffs on and the jets are loud. You’re in charge of telling the pilots what to do. When they get ready to head out, you’re the last person that they see. When they come in for a landing, you help them park the jet.”

Warren said he joined the U.S. Marine Corps in January 2017. After completing boot camp and marine combat training, he went on to a one-year training school for his specific job as a powerline mechanic, where he studied how to launch and catch jets as well as do inspections and maintenance, he said.

“(Becoming a plane captain) is a pretty tedious and long process that you have to work hard for,” Warren said. “You have to prove to your higher-ups that you can be responsible enough to do all of these important tasks.”

Warren said his training was a long and repetitive process that concludes with a test and an interview with his commanding officer and a board of officials.

“You give them an answer with confidence and if you get it right at the end of it they’ll pull you aside and congratulate you if you pass,” he said.

NATCHEZ — Motions to dismiss a lawsuit that could bring millions of dollars to the Natchez-Adams School District and other... read more