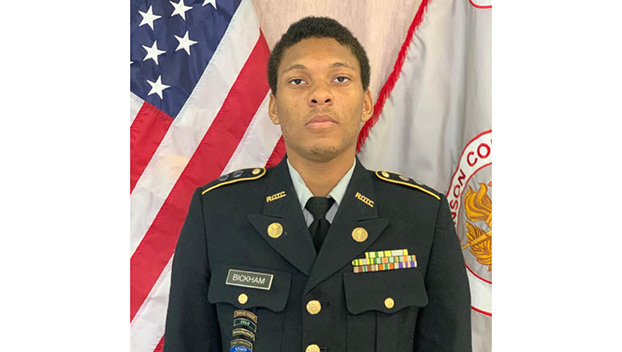 NATCHEZ —The Daughters of the American Revolution Good Citizen Award recipient at Wilkinson County High School demonstrates that he is a good citizen while inspiring others to be great ones.

Bickham is a member of the school marching band, the track and cross country teams, the debate team, the Boys to Men Club, the choir, and the Student Government Association.

He was honored with three gold medals through Cadet Challenge and won eight first-place awards in track and field events and one in the school band as the drummer.

In his essay for the DAR Good Citizen award, Bickham stated that he believes in helping his peers be the best they can be because “the world is changing” and not always for the better.

“We’ve got to stop younger generations from becoming like us,” he said, “… with all our pollution, littering and fires. … This is why we need our youth.”

Bickham said when he was younger, his mother, Shawanda Harris, made keeping the world clean seem enjoyable by seeing the world from a child’s point of view and convincing him that daily chores were fun.

“My mom convinced me that washing dishes was like cleaning a spaceship for aliens and that taking the trash out was like carrying a huge bag of food to the trash monster,” Bickham said. “She also explained to me that throwing away trash into the ocean was poisoning the fish because we were feeding them the wrong food. I’d clean the spaceship, feed the trash monster and give the fish their right food every day without being asked once.”

Bickham said teaching younger generations to care about the world they live in and to vote wisely is imperative to creating future leaders.

“The future? It always seems to catch us by surprise. … Everything starts with our youth,” Bickham said. “What seems like kids today are our leaders tomorrow, but only if we teach them the right way. … I’ve expressed to several of my friends that voting and helping the community are key concepts to becoming great citizens. We want our youth to be great citizens, not just a citizen.”

NATCHEZ — A suspect in an October 2019 Concordia Parish incident was arrested in Adams County Monday on warrants of... read more