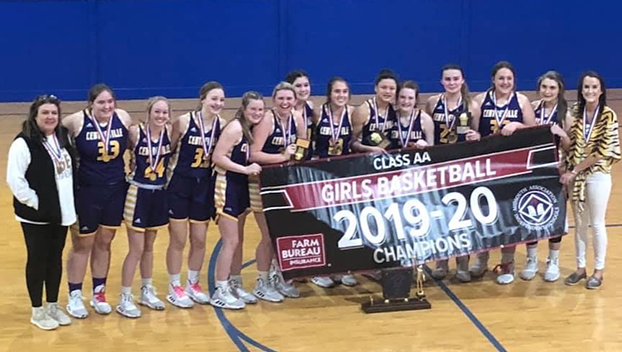 “I’m kind of speechless right now. My girls came ready to play,” Hall said. “I’m so blessed and thankful. Several people made the drive to come show us support. That meant a lot. It’s a great feeling.”

In preparation for the MAIS Class 2A championship game, Hall said the Lady Tigers watched the Lady Saints play in an early round game.

“We knew they had two players in particular that they were really good that we had to stop,” Hall said.

Savannah Hailey led the Lady Tigers with 19 points in the game and Lacy Darden finished second with 17 points.

With the victory, the Lady Tigers advanced to the Overall Tournament.

Hall said during the regular season Centreville Academy played against higher classed teams to prepare for the Overall Tournament.

“We played all non-conference bigger schools to prepare us for this,” Hall said. “I think also that helped because you need that competition. It really taught them that it doesn’t matter how big you are because a lot of times when you play bigger schools, they will have bigger depth size on the bench. It also taught them that it’s not about size; it’s about heart.”

By BILL BARKSDALE Special to The Democrat BROOKHAVEN —Both the girls and boys Natchez High School basketball teams entered the... read more