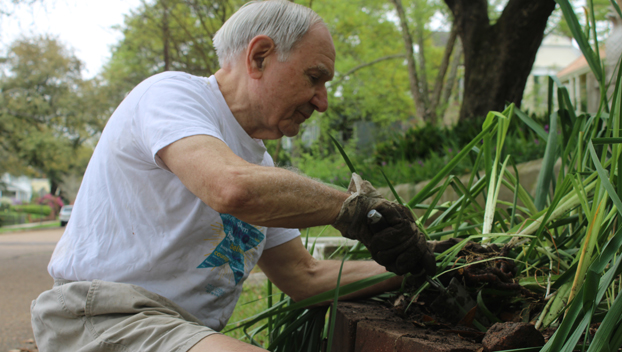 Wil Nolan works in the flowerbed in the yard of his house on Linton Avenue in Natchez. (Patrick Murphy, The Natchez Democrat)

NATCHEZ — Wil Nolan of Natchez loves to garden and that’s what he was doing when The Dart landed in near his house near Linton Avenue on Saturday afternoon.

At 75-years-old, Nolan said gardening is his favorite hobby, along with shopping for antique furniture and other collectables.

“I just like to see things grow,” Nolan said. “I enjoy that a lot and I always like plants and flowers. I grew up on a farm in Louisiana, so I have been planting and growing for a long time.”

On Saturday afternoon, Nolan was replanting some of his Iris plants into different flower bed.

Nolan said his favorite flowers to plant are gardenias and irises. Near the front steps to the Nolan’s house are lavender ground orchids. Nolan said the ground orchids do extremely well and are very pretty.

“Living in other continents gave me a deep appreciation for the United States,” Nolan said. “There’s so much more convenience here. In Africa, there was no middle class, so everybody was either extremely rich or very poor. The poverty in Africa was very overwhelming. It just makes you appreciate what we have here.”

The Nolan’s have lived in their house on Linton Avenue for 10 years. Inside their house, Nolan and his wife, Fran Nolan, have collected antique and vintage furniture and other collectables.

“We have collected antique and vintage furniture ever since we were married in 1972,” Nolan said. “Fran collects baskets and has a big collection of them. We both like pottery. Our daughter, Noelle Nolan, is a potter and gives us some of her pottery she has made.”

Nolan said he enjoys the neighborhood on Linton Avenue.

“This has been one of my favorite streets. I never thought I would be living on Linton Avenue,” Nolan said. “We have really enjoyed being on Linton and we really like our neighborhood. We have found it to be a wonderful place to live.”

John and Malan Parks announced via social media Sunday that they are closing their three Natchez restaurants due to the... read more