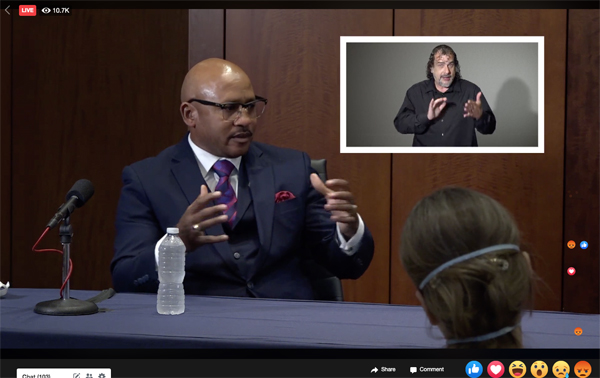 Searcy, who held an in-person Palm Sunday service with 250 attendees two days after Reeves issued a statewide shelter-in-place order through April 20 that forbids gatherings of 10 or more people, was Reeves’ guest during a Wednesday press conference at which Reeves invited Searcy to offer the prayer.

In opening the press conference Reeves said the latest COVID-19 case numbers in Mississippi on Wednesday grew by 88 overnight, which was fewer than in recent days. However, Reeves said now is not the time to relax efforts to slow the spread of the virus and noted that Sunday will be Easter.

“This is not the time to hold in-person services and fill our churches,” Reeves said. “We’ve set a statewide shelter-in-place, and it is making a difference. It has had a great effect. We also note this is still America and the government does not have the right to shut down places of worship. When you start taking people’s rights away very rarely does the government ever give it back to them.”

Reeves said Mississippi is not China and never will be.

“America’s system of government relies on our citizens to do the right thing,” Reeves said. “Mississippians are doing just that.”

Reeves noted that in a Monday press conference a reporter asked him about Searcy having held his in-person Palm Sunday church service with 250 people in attendance.

“I was asked about Bishop Stanley Searcy’s church in Natchez and whether we had the right to shut it down,” Reeves said. “I don’t believe that I do and frankly I’m glad to live in a country where that is true, and I’m proud to live in a state where that is true, but I do have the right to call the bishop, man-to-man and let him know what we are seeing from the data. I can ask him as a fellow Christian to take this extra step to protect the community. That’s what I did, and he has graciously agreed to ensure that he would come before us today.”

Reeves said he invited Searcy to attend the press conference to offer a prayer.

“I’ve also asked him to consider not to hold in-person services this weekend,” Reeves said before introducing Searcy.

Searcy thanked Reeves for the invitation and for the leadership of the governor’s staff including the Mississippi Emergency Management Agency Director Greg Michel.

Searcy said he felt his constitutional right to worship was being threatened when local officials told him he would be locked up if he held in-person services.

“Some of my local officials called me and said, ‘If you have service, we are going to lock you up,’” Searcy said. “Well that is when I kind of planted my feet, and I felt like my constitutional rights were being violated.”

Searcy said he was concerned about his constitutional rights in being ordered not to hold a service but said he appreciated Reeves as a governor and as a Christian and for asking him rather than ordering him not to hold in-person services.

“I will be willing to cancel my service on Easter Sunday to give you that time over to the 20th until we can get our peak and our curve and we can plateau things,” Searcy said. “We don’t want to see anymore Mississippians die. … I know lives are being lost. Financial abilities are being lost. I just didn’t want to lose my constitutional right.”