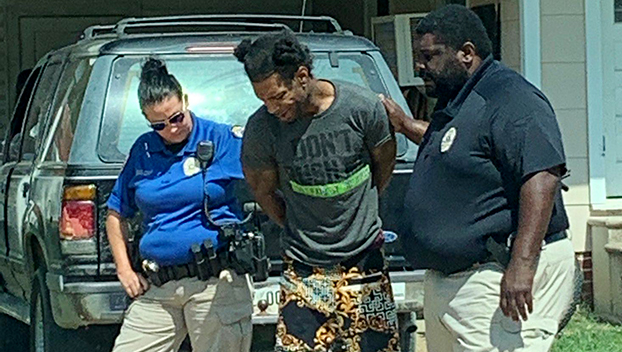 Manolo LeBlanc, center, was taken into custody and charged with theft of a motor vehicle and resisting an officer. (submitted photo)

VIDALIA — An ex-employee of an automobile detailing shop was arrested Thursday after police said he stole a vehicle from the shop.

The Vidalia Police Department was called just after 9 a.m. Wednesday to Triple C’s Auto Custom Detailing Shop for a stolen 2017 Infiniti QX80 and identified Manolo LeBlanc, 37, as a suspect after talking with the vehicle’s owner, law officials said.

Investigators learned that LeBlanc was terminated from the detailing shop the day prior.

Officers went to the house where LeBlanc was living with his girlfriend, Alexis Johnson, whom officers said provided them with false information about LeBlanc and concealed his whereabouts.

Officers received information that the stolen vehicle was in Tensas Parish and located the vehicle after 3 p.m. Wednesday with assistance from the Ferriday Police Department and the Tensas Sheriff’s Office.

While officers were recovering the vehicle, they received information that Johnson and LeBlanc were at a hunting camp nearby.

When officers arrived Johnson emerged quickly from the campsite while LeBlanc ran into the woods to evade arrest, law officials said.

Tensas dogs tracked the subject a good way and after the K-9 was exhausted, the Concordia Parish Sheriff’s Office’s dog and deputies were called to assist in locating LeBlanc and Concordia Parish’s dog, Echo, was bitten by a rattlesnake and taken to Natchez Veterinary Clinic for treatment where the dog was treated and released and was recovering Thursday.

After performing approximately four hours of searching for LeBlanc, the search for LeBlanc was called off and Johnson was taken to jail.

Thursday morning, Vidalia officers resumed their search for LeBlanc at a Vidalia residence, where they found him hiding under mattresses in a child’s bedroom and took him into custody.

Johnson was charged with accessory after the fact to theft of a motor vehicle and obstruction of justice and was given a $15,000 bond.

LeBlanc was charged with theft of a motor vehicle and resisting an officer and was given a $20,000 bond. Both suspects were still being detained as of Thursday afternoon.

“Even during trying times such as these, with the ongoing COVID-19 pandemic, there will continue to be burglaries and people who intend to do bad,” Merrill said. “We ask that you please continue to be aware of your surroundings and please stay safe.”

Gibson gets our pick in difficult decision

Feast of Pentecost calls us to accept God’s spirit

Business begins to roll in for Magnolia Bluffs Casino

NCAA offers guidance for bringing athletes back to campus

Your Take: A loch in Scotland

Local houses of worship make plans to meet in person

Our choices for Natchez aldermen