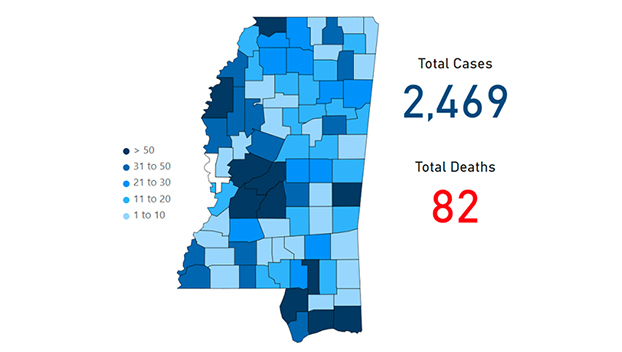 The number of confirmed cases of COVID-19 increased across Southwest Mississippi on Friday, including a 55% increase in confirmed virus cases in Adams County.

The Mississippi Department of Health reported 15 new cases of the virus in Adams County, bringing the total number of cases to 42.

The state also reported a rise in cases in Wilkinson and Franklin counties in Southwest Mississippi.

In Wilkinson County, 3 new cases were reported, bringing the county’s total to 37.

One new case was reported in Franklin County, bringing the county’s total to 9.

For the second day in a row, more than 200 new cases of COVID-19 were reported by the Mississippi State Department of Health.

The state also reported an additional 6 deaths in the state due to the virus, bringing the state’s total number of deaths to 82.

State health officials also track the number cases found in long-term care facilities such as nursing homes that are considered high risk due to their residents being in close confines, often being older and often having underlying health issues.

For the sake of reporting, the state considers even a single case of coronavirus among staff or residents of these facilities as an “outbreak” and are tracked by county below.

Easter day might be a stormy one for many residents in central Mississippi, as a line of severe weather preceding... read more