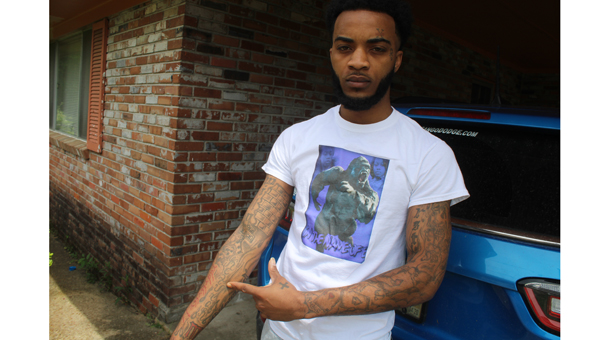 Kendrick Smith points to the first tattoo he had inked on his body. The tattoo is located on his right arm. (Patrick Murphy, The Natchez Democrat)

EDITOR’S NOTE: THE DART is a weekly feature in which a reporter and a photographer throw a dart on a map and find a story where it lands.

NATCHEZ — Kendrick Smith loves tattoos and he has plenty of them to prove it.

Each of his tattoos come with a story.

For instance, the first tattoo he got was on his right arm and simply reads, “Kenturah,” which is his mother, Kenturah Davis’, first name.

“I knew it was going to be my mother’s name,” Smith said. “She was like: ‘I’m not paying for that tattoo.’ I paid the tattoo for myself and she wasn’t happy.”

When The Dart landed Friday afternoon near George F West Sr. Boulevard, Smith was getting ready to go to work later on Friday.

Since his first tattoo, Smith, 23, now has tattoos on both his arms and two on the left side of his face.

“I knew I was going to get a lot of tattoos,” Smith said. “It’s something that I wanted when I was young. I like them and I like going to get a tattoo.”

The next tattoo Smith said he plans to get will be on the right side of his face. Smith said the tattoo will say: “Faith.”

Residents of  Jefferson County and surrounding communities can be tested Tuesday, April 14, for COVID-19 as the University of Mississippi... read more