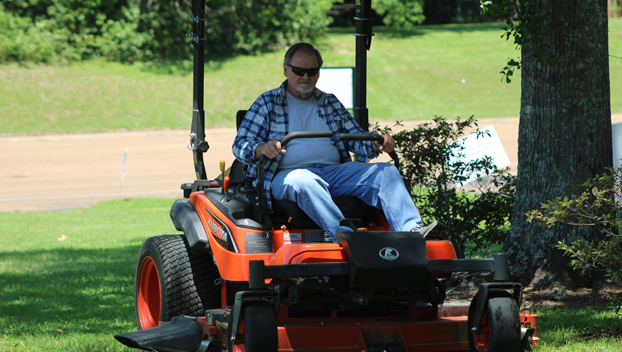 The Dart: Natchez man serves the Lord by cutting grass

NATCHEZ — Bob Heflin has been part of the First Baptist Church grounds committee for the past four years.

When The Dart landed near First Baptist Church on Friday afternoon, it was Heflin’s turn to mow the grounds.

“It’s something that has to be done and all of this grass belongs to the Lord,” Heflin said. “The Lord depends on us to be good stewards and that’s what we’re trying to do. We’re trying to maintain what he has blessed us with.”

Before Heflin moved to Natchez, he lived in West Monroe, Louisiana. With his wife, Heflin said he decided to back to Natchez to be with his grandchildren.

“Wherever I have been, I try to be always involved in a church,” Heflin said. “From the day we walked in, it has felt like this was home. I never thought twice about mowing and doing whatever it takes. It’s a pure blessing to be here.”

To mow the grass at First Baptist, Heflin uses an orange Kubota riding-lawn mower that belongs to First Baptist.

Heflin said his favorite area to mow is near the playground.

When First Baptist Church broke ground on April 10, 1977, at 150 D’Evereux Drive, Natchez, it included 48 acres of land. Now, with a parking lot, a playground and other areas added on, Heflin said there’s approximately 30-35 acres left to mow.

“This is the safest place to be during the pandemic and there is nobody out here,” Heflin said. “It’s peaceful, and it’s time you get to spend with the Lord.”

THE DART is a weekly feature in which reporter and a photographer throw a dart on a map and find a story where it lands.

By ALCORN STATE UNIVERSITY LORMAN – One of the most iconic figures in the history of Alcorn State University athletics,... read more