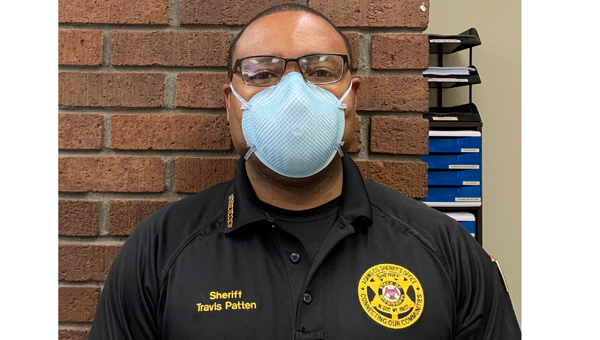 Adams County Sheriff Travis Patten survived a personal battle with COVID-19. Now he wears a mask and gloves to protect others. (Submitted Photo)

NATCHEZ — Adams County Sheriff Travis Patten said on the morning of March 17 he went to work like any other day but throughout the day his body started aching so he left work and went home early.

“By 8 o’clock that night my fever went from normal to 101.5,” Patten said. “I didn’t come in the next day, but I started trying to get medical attention.”

Patten said he sought help at the Veterans Affairs and by the time he got there he had body aches and fever.

“What they did was at the time, they didn’t have the COVID-19 test,” Patten said of the VA. “They could only test me for like strep throat, pneumonia and the flu. I came back negative for all of that.”

At the time, Mississippi had only reported the state’s first case of COVID-19 on March 11 and had not yet confirmed any cases in Adams County.

Natchez Mayor Darryl Grennell had formed the state’s first COVID-19 Task Force on Feb. 26 made up of business and health professionals to advise measures to protect the city and a planned St. Patrick’s Day Parade in Natchez had been canceled due to COVID-19 concerns on the very day Patten said he began feeling sick.

“It did not even cross my mind that (COVID) is what it was,” Patten said of his initial sickness. “I thought it was hay fever or allergies or something because every time I walked outside, I couldn’t even see my car because it was covered fully in pollen.”

Patten said he thought his aches and fever were due to the high pollen count.

“Seasonal allergies is what I thought it was,” Patten said.

After the initial aches and fever Patten said he decided what he was experiencing was more than just allergies, especially after the tests from the VA for pneumonia, strep and flu had all come back negative.

“Two and a half days later, the fever broke and I was feeling good,” Patten said. “By that time, the weekend came up and passed and I didn’t have anything going on, so I took an extra day that Monday just to be cautious to make sure I was feeling good and the next day that’s when the other symptoms started popping up.”

Patten said the first symptom after his fever broke was trouble breathing at night.

“It was like somebody was sitting on my chest,” Patten said. “It was only happening at night, so, again, I’m thinking, ‘OK, maybe it is allergies’ because I could feel something tingle in the back of my throat, and I was having trouble breathing at night only when I was sleeping.”

Patten said he never had all the COVID-19 symptoms at one time.

Patten said he contacted Merit Health Natchez again and was finally able to get a COVID-19 test.

Patten said his test results came back positive on Sunday, March 25, and he immediately made his positive status public.

“I wanted anybody I had been around in that period to be aware so they don’t spread it or if they had any kind of illnesses they would seek treatment as well. The only thing about treatment is, there wasn’t any then and there still isn’t any now.”

Patten said he stayed home and treated the symptoms the best he could with home remedies and Tylenol and cough syrup.

“I drank a lot of warm teas that were full of vitamin C, Emergen-C powders, with 1,000 mm of vitamin C,” Patten said. “Of course, I was drinking Tussin cough syrup as well.”

Patten said he believes a homemade remedy he found on the internet helped opened up his lungs.

“You take a lemon peel,” Patten said. “You take the peel of an orange. Boil some water and put some sea salt in it and sit over it and sniff it for 15 minutes a day twice a day. Sniff the steam off it over the stove … I kid you not, I did that stuff two days in a row and felt great.”

Patten said he is not sure that remedy played a part in his recovery, and he acknowledged that he is a healthy 40-year-old with no underlying conditions.

“All I can think is, Lord I thank you for healing me the way you did,” Patten said, adding there is not a cure or a vaccine for COVID-19. “You are on your own, so I’m very thankful that the Lord blessed me with a healthy immune system where my body could fight this thing off. It was definitely an eye-opening experience in the fact that you are dealing with something that there is no vaccine for and there is no cure for and that people really don’t know about and you’ve got to fight this on your own.”

Patten said when he learned he was COVID-19 positive, he had only one place to turn.

Patten said he also learned through his struggle with COVID-19 who really cares about him and he is grateful to the many people who brought him things such as “Get Well Soon” notes, oranges, Chips Ahoy cookies and other care packages.

“When you are going through something like this, your mental health is just as important as your physical health,” Patten said. “To know that I had that many people pulling for me in the county and praying that I get well, it pushed me on.”

Patten said he did not go back to work until four weeks after his test results.

“I went back to work at the beginning of last week,” Patten said, adding he did not want to make his co-workers nervous and that he is wearing a mask and gloves everywhere he goes now.

“Once you go public like I did, people do treat you different,” Patten said. “When people first see you they jump.”

NATCHEZ — The Natchez Mayor and Board of Aldermen in a special-called meeting Thursday unanimously adopted a “Back to Business”... read more