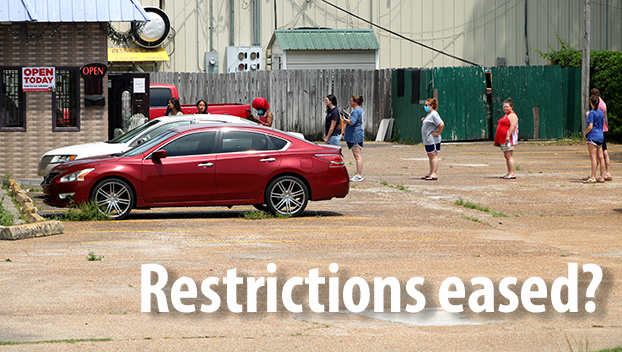 People line up outside Thursday afternoon outside Little Tokyo in Natchez to buy carry-out orders. (Patrick Murphy / The Natchez Democrat)

NATCHEZ — Mississippi restaurants can begin serving dine-in customers at 8 a.m. Thursday as long as they follow guidelines set forth in Gov. Tate Reeve’s latest executive order or unless they are under jurisdiction of local governments with more strict orders.

Such is the case in Natchez, where, under the city’s latest “Back to Business” order, restaurants are only allowed to serve customers curbside, pick up and delivery through May 31.

Reeves’ order issued Monday amends his “Safer at Home” order effective through May 11 and allows restaurants and bars to reopen to dine-in customers after they have met, among other requirements, deep-cleaned, disinfected and sanitized facilities top to bottom, plan to screen employees daily, require employees to wear facemasks, operate at no more than 50% capacity and more.

Natchez Mayor Darryl Grennell said the city’s more strict order takes precedent over the state’s order and that inside the Natchez city limits, restaurants and bars can only serve customers through curbside, pick up and delivery.

Outside of the Natchez City Limits in Adams County, however, restaurants can operate under the statewide order, said Robert Bradford, Adams County Emergency Operations manager.

Bradford said he knows of only two restaurants in Adams County, Roux 61 and Mammy’s Cupboard, which are both located on U.S. 61 north of Natchez.

Brian Lees, owner of Roux 61, said Roux 61 had been operating in recent weeks with curbside and pick up service, but he plans to open Roux 61 to 50% of its dining room capacity on Friday.

“As far as Friday goes, we will be seating, according to the governor’s guidelines,” Lees said. “We will be observing social distancing in the building. There will be a lot of different changes in how we operate on a normal day as far as how our guests enter the building and guests waiting in cars being texted when their table is ready. It’s just so that we can mitigate contact with people that they don’t have to have. We will have signage posted out front explaining to customers about the new regulations and the requirements we’re expecting of customers when they come in.

I’m just excited to get back going and I think all businesses would be excited.”

On Tuesday afternoon, the Little Tokyo restaurant off of U.S. 61 south in Natchez had a line of patrons standing six feet apart from each other waiting to go in to pick up their orders to take home.