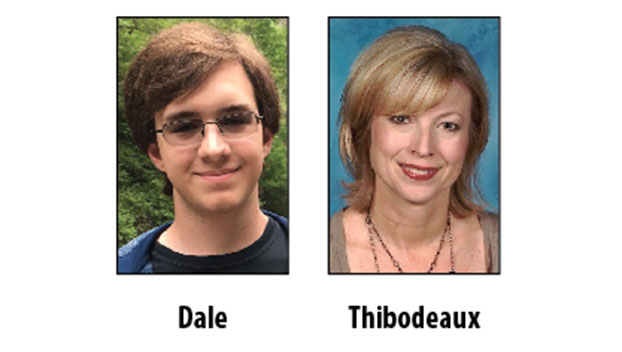 Dale is the son of Lisa and Peter Dale and stepson of Veronica Dale and Allen Myers. He is an active member of the Jefferson Street United Methodist youth group; a member of the district board of directors for the Key Club; Natchez Youth Leadership Council; the National Honor Society; and the Boy Scouts of America, in which he will soon receive his Eagle Scout badge.

Dale earned a perfect 36 on his ACT his junior year and has worked to maintain a perfect grade point average.

“I was anticipating this award not just for my ACT score but with my overall academic profile,” he said. “But I’m sure my ACT score contributed a lot to it.”

The class subjects he enjoys most are math and science, Dale said, adding he has been a member of the school’s Science Olympiad team since his freshman year.

Each STAR Student is asked to select a STAR Teacher who contributed to their academic success and Dale chose Denise Thibodeaux who teaches microbiology at Copiah Lincoln Community College and also teaches dual enrollment courses at Cathedral.

“She has been a teacher I’ve had almost every year of high school,” Dale said. “Not only did she teach in a way that I could understand very easily but she was the teacher who initiated me and asked me to join our school’s Science Olympiad team, which has been my favorite high school extra curricular activity.”

“(Dale) always made time to help other team members,” Thibodeaux said. “… I remember he was bouncing ideas back and fourth with another student and I think he was in the 10th-grade at the time. I looked at him and thought, ‘This child has surpassed me already.’ I didn’t know if there is anything I could teach him because the things he would say were just so brilliant.”

Dale and his teammates in Science Olympiads won on the state level and competed on a national level for three consecutive years, Thibodeaux said.

Dale said he has an interest in programming and software development that partly stems from his experience participating in competitive events with the Science Olympiads, including coding and game creation.

After graduation, Dale said he plans to study at the Rochester Institute of Technology in New York and would like to pursue a career in video game and software development.

“Science Olympiad was something I really enjoyed it was a place where you didn’t just learn,” Dale said. “People were interested in learning all about these different areas not just in interest of the fields but also learning how to apply them — being able to take a test for it or even building a mechanical box or something of that nature.

Democrat to sponsor election Q&A with mayoral candidates in primary