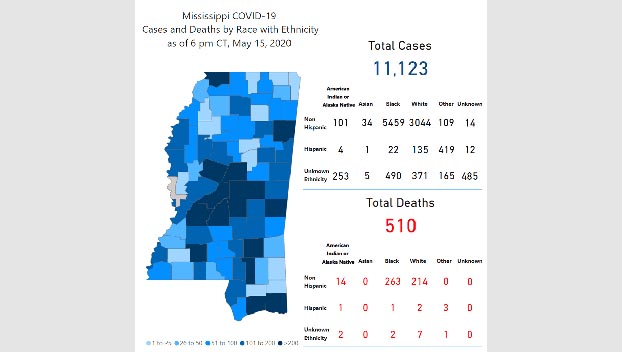 Saturday update: COVID-19 cases continue to climb in Mississippi; Cases in Adams County up by 5

New cases of the COVID-19 coronavirus in Mississippi continued to climb higher Saturday as the state reported the latest statistics for the virus.

The Mississippi State Department of Health reported an additional 322 new cases have been confirmed in the last 24 hours bringing the total cases to 11,123.

The state reports that more than 56% of the cases are presumed to have recovered. As of May 15, 108,476 Mississippi residents have been tested by the state and by private labs MSDH reports.

The state announced Saturday morning 17 new deaths were attributed to the virus bringing the total death toll to 510. Two of the deaths reported Friday actually occurred earlier, but the reporting was delayed.

The state reported that 243 deaths were of residents of long-term care facilities or approximately 48 percent of all deaths in the state.

The Broadway Street Farmer’s Market drew a large crowd looking for fresh produce and a chance to get outside. Long... read more