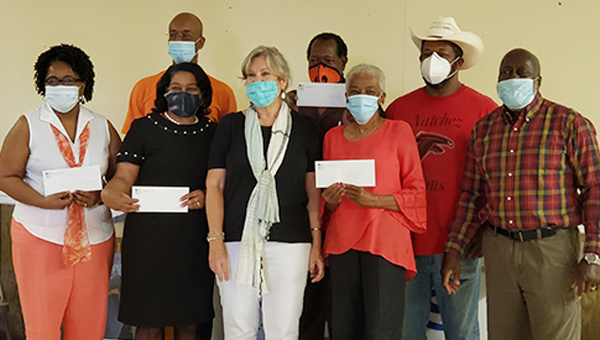 NATCHEZ — Members of four different charitable organizations in Adams County were presented with a sizable donation from another Mississippi nonprofit on Wednesday.

Watts said more than $17,000 had been split among the groups to help them with their causes.

Watts said RC&D was invented on a national scale in 1960 and arrived in Mississippi in 1973 to assist communities with a vast array of resource conservation and community development projects — including providing educational opportunities to area youth and building parks — using funds through the Natural Resources Conservation Service and other grants.

In 2010, NRCS pulled out of the nonprofit and the organization’s former office in Brookhaven had to close, Watts said.

“I am thrilled at the charities that our council members have chosen because they are all very worthy of receiving this money,” Watts said. “We decided as a board, rather than sit on this money any longer, lets put it on the ground where it is needed — within the areas that participate in our program. So here we are today and the Southwest Mississippi RC&D council is pleased that you will be carrying on the purpose, goal and direction of our program by using this money in efforts toward your goals.”

Ricky Gray, president of the Adams County Board of Supervisors, said Southwest Mississippi RC&D’s donation is good for the residents of the county who benefit from the organizations receiving the funds.

“First I’d like to say that this is a good thing for Adams County,” Gray said. “… I want to say on behalf of the more than 31,000 citizens of Adams County and on behalf of all of these nonprofit organizations who are receiving this money we just want to thank you and thank you again because we need it.”