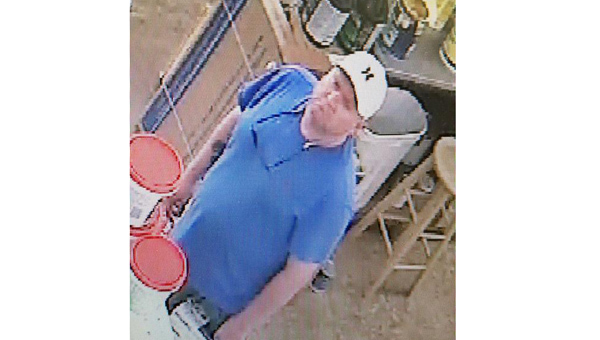 Justin Duane Cole, 40, is captured here in a screen shot from a surveillance video attempting to pass what police said was a counterfeit $100 bill. (Submitted photo)

Miss-Lou police searching for man in connection to counterfeit money

NATCHEZ — Local authorities are searching for a man suspected of passing fake $100 bills in Natchez, Vidalia and Ferriday in late May and early June.

The $100 bills appear to be a 2006 series, some of which passed a marker test and have a fake watermark, Lipscomb said.

Others at Budget Build and Ferriday market also had possession of fake $100 bills and later said they received the money from Cole, Lipscomb said.

Merrill said the store attendant at Murphy USA had suspected the bill of being fake, but the suspect fled the store and drove toward Natchez.

“We advise local stores to be aware of what is going on and check their bills carefully,” Merrill said. “I’d like to thank our investigators here in Vidalia and Ferriday investigators for working together and to identify this individual.”

Natchez Police Chief Walter Armstrong said he has received reports of at least $300 in fake bills being passed in Natchez in recent weeks, including $200 that passed at a Walgreens on May 26 and $100 that passed at a Natchez Market on June 8.

Lipscomb said Cole’s last known location was at the Holiday Inn in Natchez where he’d stayed for a few days in early June before checking out.

Cole is a white male who had been wearing a white hat, is bald, has a large tattoo of a Fleur De Lis on his right forearm, and has been driving a grey 2020 Mercedes four-door sedan with a Texas license plate, Lipscomb said.

“Anyone with information about this individual should call 911 immediately,” Lipscomb said.

NATCHEZ — Members of four different charitable organizations in Adams County were presented with a sizable donation from another Mississippi nonprofit... read more