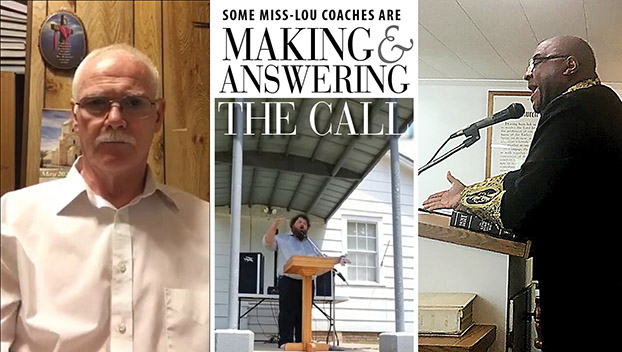 Kevin Campbell, center, is a preacher at Cranfield Baptist Church in Roxie. At right, George Barnes is a Southern Baptist preacher who has been preaching for 15 years. At left, Warren Whitaker preaches at Fort Adams Baptist Church. (submitted photos)

Area football coaches preach the sport and the Gospel

George Barnes, Warren Whitaker and Kevin Campbell involve themselves in both coaching and preaching.

Barnes is a Baptist preacher and has been preaching for 15 years. Barnes also coaches the Ferriday High School Trojans boys basketball team. Barnes said preaching was never his calling.

“I never visualized myself being a preacher,” Barnes said. “I went through some things and God revealed to me that preaching was my calling.”

During the COVID-19 pandemic, Barnes has hosted livestreams of himself preaching via social media. Barnes said his message depends on what the Lord puts on his heart.

Besides being a preacher, Barnes has been coaching for 20-plus years.

“If both of preaching and coaching are done right, then they can play a big role of preparing people for life,” Barnes said.

At ACCS, Whitaker coached football for three years and track for four years.

Whitaker has preached at Fort Adams Baptist Church for 28 years. Whitaker said he was a preacher before he became a coach.

“I played football in high school and one year in college,” Whitaker said. “I enjoyed being part of the game and working with young people.”

Lastly, Campbell is a pastor at Cranfield Baptist Church in Roxie.

“When I was 17 years old, I heard the Lord speak to me and He called me to be a preacher,” Campbell said. “It was something I desired and loved to do.”

On Friday nights, Campbell can be seen on the Natchez High School Bulldogs football field as the offensive-line coach.

This upcoming season will be Campbell’s ninth season of coaching. Campbell said he realized he wanted to be a coach when he was in middle school.

For preachers around the world, Campbell said he wants people to think of them differently.