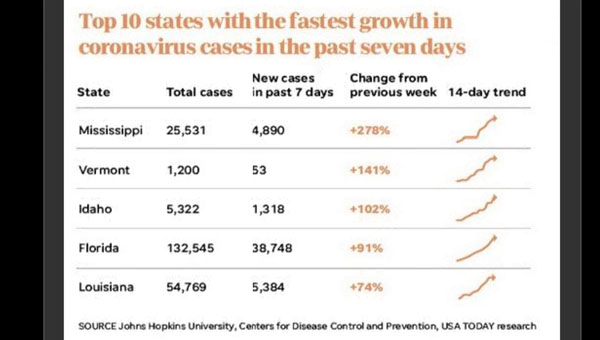 NATCHEZ — Mississippi had the fastest growth in new coronavirus cases in the nation in the seven-day period June 21-28 with 4,890 new cases being recorded, according to statistics produced by Johns Hopkins University.

That number represents a 278% growth in the number of new cases over the previous week and capped a 14-day growth trend in the state.

“A few of those days are tied to a data dump we had, but still we have been seeing rates of increase during the past seven days,” said Norma Williams during Monday’s Natchez COVID-19 Task Force meeting.

“Over the past seven days, June 21-June 27, Adams County had an additional 21 new cases, bringing our total to 248 for an 8.5% increase, whereas the week before we had just under a 1% increase,” Williams said in her report that was made before Monday’s Mississippi State Department of Health released the state’s latest figures which showed 675 new COVID cases for the state. “Yesterday’s numbers from the Mississippi Department of Health added another four new cases in Adams County.”

During that same period Concordia Parish also saw an increase in cases.

“Concordia Parish saw five new cases, a 5% increase in their total, up to 116 cases and one death bringing their total up to six deaths,” Williams said. “Adams County is holding with 18 deaths, so we didn’t have any new deaths.”

Williams said Adams County’s positive infection rate among people tested for COVID-19 is 14% compared to a 9% infection rate for the rest of Mississippi.

“I hate to be the bearer of bad news, guys, but somebody has got to do it,” Williams said in concluding her report. “I get a little discouraged when I see people aren’t wearing their masks out in the public, and I know everybody on the task force has been asking people to wear masks. I don’t know what we can do.”

Task Force Chairman Dr. Lee England, an infectious disease specialist in Natchez, said he too is disappointed in the latest numbers.

“I’ve been watching Mississippi State Department of Health figures on their internet site and have begun to worry that they weren’t correct on three straight weeks with three new cases each week and a 1% rise but now we are seeing this,” England said. “This doesn’t sound good at all. It is really what I was afraid of so I wonder if some aren’t calling in their positives to the state department of health.”

“We are in the process of testing employees that have come in contact with them, and I tell you it is really scary out there,” Grennell said. “We have got to get the public out there to wear masks and to sanitize and to keep their hands sanitized and washed as much as possible and making sure they are social distancing.”

“I think of those, maybe the masks are the most important,” England said. “There is an element of people who don’t want to do it and that’s got the chance of messing up everybody.”

England said the earlier round of COVID-19 spikes in March and April were tough on the hospital staff and said he is concerned about the latest spike.

“We don’t need another one,” England said. “And, if it comes in bigger than that, we really have trouble.”

“So far for the month of June we have run a total of 318 tests,” Boyd said. “So, we ran almost half of our tests last week. We’ve run 318 tests and had 65 positives for a 20% conversion rate. We are starting to see more demand on that.”

Boyd said Merit Health had 12 patients come to the Emergency Room with COVID-19 symptoms on Saturday and nine patients tested positive with one being admitted to the hospital.

Boyd said the No. 1 common factor among recent COVID-19 patients is obesity.

“We have seen a link between some other things but right now the commonality is obesity with those patients,” Body said.

Boyd also announced that Merit Health would be testing some 600 Alcorn State University students, including student athletes, for COVID-19.

“Although we have a test that we can get results in 15 minutes, the sample is only good for about two hours because it is a dry sample, and we can only run one to three of those at a time so it does take a while to do 600 students,” Boyd said. “We are working on getting the capability … (to where) we can do up to five at a time and that would help us get some mass testing. … Our goal is to be able to get as many tested as possible. After Wednesday we are going to have the capability of having a lot of tests available to us. We are glad for that.”