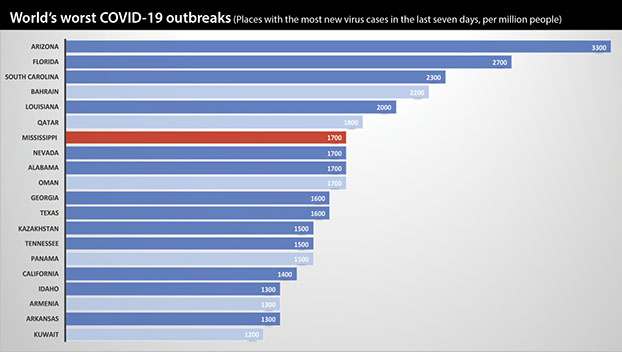 New COVID-19 cases are rising more quickly in Mississippi than nearly every country, yes, country, in the world.

The numbers recorded by the Centers for Disease and Control Prevention were reported in a story by the New York Times Wednesday.

Adjusted for population size, only Bahrain, Qatar and Oman outrank the state when looking at the number of new cases in the last seven days.

Bahrain (2,200 new cases per million people) ranks fourth on a list ranking the seven-day growth of virus cases among the 50 states and the countries with the world’s worst outbreaks.

Louisiana (2,000 new cases per million people) ranks just behind Bahrain at No. 5, followed by the Middle Eastern countries of Qatar and Oman.

Thirteen states, including most states in the South, are ranked in the Top 20 places with the most new virus cases in the last seven days.

Above is a chart that ranks countries and states with the most confirmed new cases over the past week, adjusted for population size.