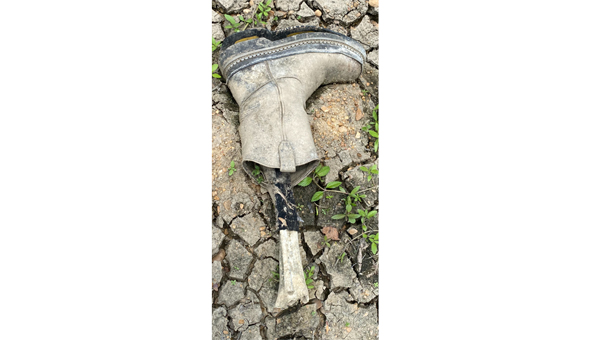 A man’s boot with what appeared to be human bones in it was found Monday along the bank of the Mississippi River in an area known as Anna’s Bottom. (Submitted Photo)

NATCHEZ — Adams County Coroner James Lee said he is hopeful DNA collected from human remains found inside a boot at Anna’s Bottom earlier this week will lead to closure for one local family.

Lee said he believes he has been able to identify, with the help of local authorities, to whom the remains belong.

The remains inside the boot found by Mississippi Department of Wildlife, Fisheries and Parks officials on Monday were transported to the Mississippi State Crime Lab where an anthropologist conducted a post-mortem examination.

“I found out that we were able to collect DNA samples from the foot inside the boot for identification,” Lee said. “The next step is to match X and Y chromosomes with his parents.”

Lee said he believes the remains are from a person who has been reported missing for more than a year and a half.

Lee said he plans to meet with family members, who have been contacted by local authorities, to collect DNA swabs that will be compared with samples that were collected from the boot.

“Then I believe we should come up with a positive identification,” Lee said.

Lee said he would release more information about the remains after a positive match is made.

“I am very optimistic about this case,” Lee said. “We are working to bring closure to the family.”