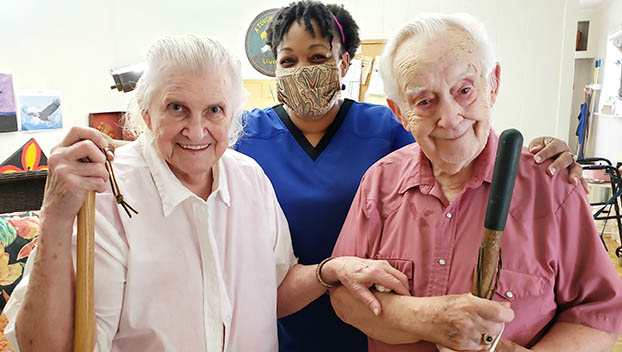 Home health nurse Natasha Posey said she never has a dull moment caring for Doris and John Kerwin, a colorful Natchez couple who will soon be celebrating their golden anniversary. (Sabrina Robertson / The Natchez Democrat)

NATCHEZ — There is never a dull moment while Natasha Posey, a home health nurse, is caring for her patients Doris and John Kerwin, Posey said.

When The Dart landed at the Kerwins’ home on Woodville Drive on Friday amid the COVID-19 pandemic, the Kerwin couple was enjoying their time shut-in together by sharing stories, teasing each other and showing their creativity.

John, who also goes by the name “Captain Jack,” said he was nearing 50 years of marriage to Doris and nearing 95 years of age — although he had just celebrated his 94th birthday in June.

Doris said John had earned a reputation in his neighborhood by walking at least a mile every day down his street with his signature walking stick for as long as his health would allow him to.

“He has walked a mile a day for at least 30 years,” Doris said. “That’s like walking across the country.”

John said he is also known for “giving Uncle Sam 25 years of service” in World War II, Korea and Vietnam and for his teaching 4-H, hunter’s safety, archery and tai chi classes.

Tai chi is an ancient Chinese exercise almost like a dance that can be used for health and meditative purposes and has been taught by John every Wednesday at St. Mary Basilica for approximately six years, he said.

“I teach about four men and 60 to 90 women — the oldest is about 90 years old,” John said. “The word around Natchez is ‘feed them and they’ll come,’ so I do pigs in a blanket, coffee and biscuits with jelly for the participants.”

Though Doris is too humble to admit to her talents, John said he likes to boast about her gifted hands, which she has used for making rugs and wall decorations, paper mache dolls, origami and painting.

“The one great thing I’ve done is I married this one and it has been colorful,” John said of Doris.

Posey said when she came to work for the Kerwins two years ago she quickly learned that she shared a lot of things in common with Doris. Posey and Doris almost share a birthday in February as well as other hobbies and interests, she said.

“Her birthday is on the ninth and mine is on the sixth,” Posey said. “We’ve got a lot of things in common. We do jigsaw puzzles and she taught me how to paint and make rugs. She teaches me a whole lot.”