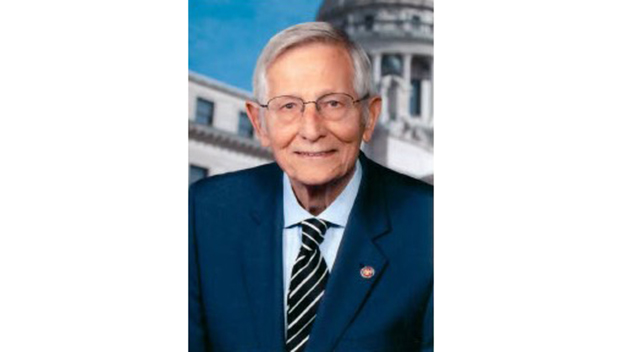 NATCHEZ — Graveside services for Senator Robert Montgomery “Bob M.” Dearing, 85, of Natchez, who died peacefully at his home Thursday, July 30, 2020, will be at 2 p.m. Saturday, August 8, 2020 at the Natchez City Cemetery with the Rev. Dr. Joan Gandy officiating. A memorial, celebration of life service for Bob M. will take place in Natchez once community health conditions improve. Burial will follow under the direction of Laird Funeral Home.

Bob M. was born January 26, 1935, in Natchez, the only child of Robert V. and Weenonah Montgomery Dearing. With the exception of one year, he was a lifelong resident of that city.

He was educated in the Natchez Public Schools and was a 1953 graduate of Natchez High School, where he served as president of his junior and senior classes. He also served as president of the “N” club and was on the staff of the school newspaper and yearbook. A talented athlete, Bob M. was a second-team All Big 8 Conference halfback on the football team. He led the Big 8 in pass interceptions his junior and senior years and the team in yards per carry his senior year. He earned three letters in that sport and two letters in basketball and baseball. Several of his closest and most enduring friendships were made during this time of his life.

In the fall of 1953, Bob M. enrolled at Delta State College. He was elected president of his freshman and sophomore classes, vice-president of his junior class and of the Student Government Association (SGA), and was President of the SGA his senior year. He attended Delta State on a partial athletic scholarship, playing football for two years and baseball for three years, lettering in both sports. After getting hurt in football, he tried out for cheerleader and cheered the Statesmen from the sidelines his senior year. He graduated Delta State in 1957 with a Bachelor of Science in Education. He loved Delta State and the strong friendships he developed there lasted throughout his life. He completed additional post-graduate coursework at the University of Florida, University of North Carolina, and Mississippi College. In 1966, he earned a Master of Education Administration from the University of Southern Mississippi. He received an honorary doctoral degree from Delta State University in 2012.

He was a member of the Mississippi Army National Guard from 1958 – 1966, and served on active duty in the United States Army in 1958 and from 1961 – 1962. He loved sharing stories with his children about his experiences serving his country.

Bob M. began his professional career as a high school coach and teacher in Key West, Florida. He returned to his hometown of Natchez in 1958, where he coached, taught, was an elementary school principal in the Natchez School District. He loved the nine years he spent as an educator, and many of his former students and players still called him “Coach” when they saw him, and would fondly recall with him their memories from the classroom, on the athletic field or the playground, and for some, in the principal’s office. Bob M. relished the role of mentoring and encouraging others. He was a teacher at heart the remainder of his life.

He left the teaching field in 1966, and took a position as a senior associate for Science Research Associates (SRA), the educational subsidiary of International Business Machines (IBM). During the 21 years he worked with the company, Bob M. continued to make some of his closest and most trusted friendships. After retiring from IBM, he built a successful career as an agent for AFLAC Inc.

Always enjoying interaction with others, Bob M. had several side careers through the years. From the mid-1960s through 1979, he officiated high school football and boys and girls basketball in Mississippi and Louisiana. He enjoyed taking part in the athletic action from the new perspective of referee, rather than player. The men who officiated with him were among those he counted as fine friends and he loved the good times they had together. In the early 1980s, his voice was a familiar one on Friday nights as the radio announcer during high school football games for South Natchez and Cathedral. More recently, he taught American Government at Copiah-Lincoln Community College – Natchez and worked part-time in the pro shop at Duncan Park Golf Course. He was a good golfer and liked staying involved in a sport he participated in throughout his life.

In 1979, Bob M. ran for an open seat in the Mississippi State Senate. He won and represented District 37, in Southwest Mississippi. He was elected to 9 four-year terms and served his constituents for 36 years with conscientiousness, honesty, trust, and respect. He felt honored to be a member of the state legislature where he truly enjoyed and took seriously the duties and responsibilities of serving the people. He served during the administrations of 7 governors and 6 lieutenant governors. He loved and respected the body of the State Senate, its traditions, its procedures, and the camaraderie of the men and women with whom he worked in the Capitol. He formed lasting friendships there, too. He served on numerous committees and was Chairman of the following committees: Highways and Transportation; Municipalities; Fees and Salaries; Oil, Gas, and Other Minerals; Environmental Protection, Conservation and Water Resource; and Forestry. Bob M. was a dedicated public servant who loved helping others. Among the thousands of pieces of, both, mundane and significant legislation he voted on in the Mississippi Senate, he was most proud of the passage of two bills in particular. They were the 1982 Education Reform Act providing public Kindergartens and the 1987 Four-Lane Highway Program, a long-range highway program to build 1,077 miles of four-lane highways over a 14-year period, which was one of the most comprehensive in the country.

Of the dozens of bills of which he was the sole or lead author and which he introduced and successfully guided to passage in the Mississippi Senate, there were five that were his most satisfying accomplishments: the passage of landmark legislation in 1990 legalizing casino gaming, leading to thousands of jobs along the Mississippi River and the Gulf Coast and billions of dollars in state revenue; early 1990s legislation making retirement income exempt from state income tax; 1997 legislation providing $1,500,000 in funding for the Bluff stabilization project for the City of Natchez; 2001 legislation to complete the 4-laning of Highways 84 and 61within his Senate district, and bills that strengthen laws against animal cruelty, namely the 2011 legislation making aggravated cruelty to a domesticated dog or cat a felony and the 2018 legislation adding two years of jail time to first-offense dog-fighting convictions and mandating stiffer penalties for second and subsequent offenses.

He was a genuine, humble man of strong principles and integrity who cared about doing the right thing and was very good at making government work to serve the needs of his community and the people of Mississippi.

Bob M. was a committed, faithful, and steadfast member of First Presbyterian Church in Natchez, where his family has worshiped for many generations. There he taught Sunday School for 37 years and served as an Elder for 3 terms, a Deacon for 4 terms, and as Sunday School Superintendent. He loved his church, being with his church family, and giving glory to God.

He served as President of the Delta State University (DSU) National Alumni Association in 1969, was recognized in 1997 as the Outstanding Alumnus of the Year, and was inducted into the DSU Alumni Hall of Fame in 2007.

The Natchez Jaycees selected him as the Outstanding Young Man of the Year in 1965. He received the Distinguished American Award from the Natchez chapter of the National Football Foundation and Hall of Fame. From 1980 – 2019, he was the Executive Director of the Gulf Coast States Oil & Gas Invitational Tournament. He served as a board member for many organizations including the Natchez Adams County Humane Society, the Natchez Festival of Music, the Margaret Martin Performing Arts Center, the Natchez Little Theater, the Mississippi Arts Fair for the Handicapped, Friends of the Arts in Mississippi, and the Energy Council. He was also a member of Omicron Delta Kappa National Leadership Honor Society, Phi Delta Kappa, the Delta State University Foundation, the Alumni Associations of Delta State University and the University of Southern Mississippi, the National Football Foundation and Hall of Fame, and the Natchez Trace Parkway Association. Always Never one to let a good time pass him by, he was a Duke for the Krewe of Phoenix in 1989 and was Grand Marshall of their Mardi Gras parade in 2019. He was also chosen in 2019 by the Krewe of Killarney to be St. Patrick XXIX and to lead their parade.

Above all, he was devoted to his family. He would have celebrated his 58th wedding anniversary with his dear wife, Shelley, on August 18, 2020. He cherished her and his three children and showed his love through words, kindness, patience, thoughtfulness, and selflessness. His gentle sense of humor was a delight to them, and they loved being with him and creating and sharing the stories and memories of his life’s experiences. He is loved and deeply missed by them and by his legions of friends and many others that he touched in so many ways.

His character, innate nature, and life is best personified by the words from 1st Corinthians, Chapter 13, Verses 1 – 8, “If I speak in the tongues of men or of angels, but do not have love, I am only a resounding gong or a clanging cymbal. If I have the gift of prophecy and can fathom all mysteries and all knowledge, and if I have a faith that can move mountains, but do not have love, I am nothing. If I give all I possess to the poor and give over my body to hardship that I may boast, but do not have love, I gain nothing. Love is patient, love is kind. It does not envy, it does not boast, it is not proud. It does not dishonor others, it is not self-seeking, it is not easily angered, it keeps no record of wrongs. Love does not delight in evil but rejoices with the truth. It always protects, always trusts, always hopes, always perseveres. Love never fails.”

His parents preceded him in death. He is survived by his wife of nearly 58 years, Shelley Ditzler Dearing; two daughters, Stephanie Daye Dearing of Natchez, Clifford Paige Dearing of Natchez; and one son, Robert Montgomery “Bo” Dearing, Jr. of Houston, Texas.

Memorial gifts may be sent to either the First Presbyterian Church, the Natchez Adams County Humane Society, or the Delta State University Foundation.