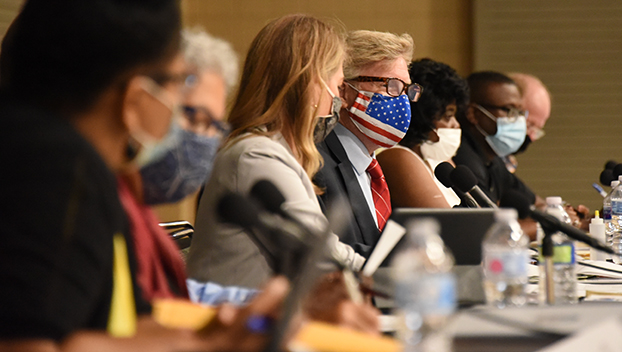 Natchez Mayor Dan Gibson said duplicate measures to combat the spread of COVID-19 from the city and Adams County Emergency Operations Center should be consolidated.

“The City of Natchez from this point forward is under the authority of the governor and the EOC,” Gibson said. “The city is falling in step, as all cities do, with the governor and EOC of each respective county.”

Barry Bequette, a Natchez resident and professor of agriculture and science at Alcorn State University, voiced his opposition to the city imposing a mask mandate during Tuesday’s meeting.

Bequette listed off more than a dozen businesses that have closed in recent months, some before and during the COVID-19 pandemic.

Gibson agreed with Bequette that the signs should be removed.

“We do not want stay home signs. No, we want to celebrate an open economy because it is critical to our survival as a city,” Gibson said. “We can’t remove those signs that have been purchased by private property owners but we do encourage them to remove them because our economy has been open for quite some time.”

NATCHEZ — The City of Natchez under the direction of then-mayor Darryl Grennell was the first city in Mississippi to... read more

Belk Chapter 11 bankruptcy filing should not interfere with store operation