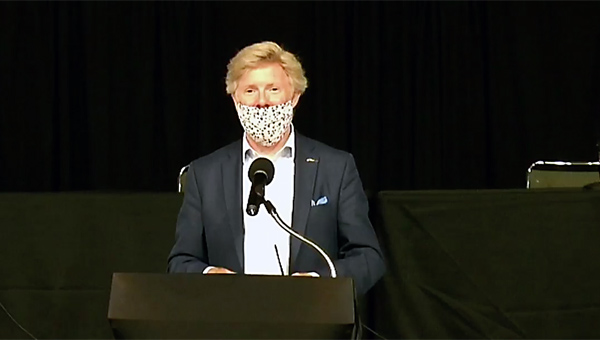 NATCHEZ — The City of Natchez under the direction of then-mayor Darryl Grennell was the first city in Mississippi to implement a COVID-19 Task Force earlier this year.

After the establishment of that task force made up of elected and private sector leaders and medical experts, the state and county later declared emergencies due to the COVID-19 pandemic.

“We want to make sure it continues to work, but I am one that believes in efficiency,” Gibson said. “I believe also that the more we can work as one rather than a duplicity of effort the better it is at the end of the day for Natchez, Adams County as a whole. So, Mr. Bradford, I would like to now say this, I would like to have a discussion with you very soon about how we could roll the city’s task force into the county’s task force so that there is only one task force for Natchez-Adams.”

Gibson went on to explain that the Mississippi Emergency Management Administration oversees the work of the state’s EOCs.

“All the emergency operations are handled on the county level and then EOC at the county level works through the municipalities,” Gibson said. “Mr. Bradford, I just believe it would streamline the process if we bring this COVID Task Force into the county’s task force under your direction. I would be there representing the City of Natchez and our partners along with (Adams County Board of Supervisors) president (Ricky) Gray representing the County Board of Supervisors and the county partners.”

Gibson said he and Bradford would get together at a later unspecified time to discuss the details.

“That is a great idea …” Bradford said. “… I would be glad to accept. I’ve been working close with some of the members on the task force. A lot of members on the task force are by state statute supposed to be represented on the EOC automatically. We just have to get together and see who is going to come to the EOC and represent from the volunteers from the different businesses.”

Gibson asked if anyone in Monday’s meeting wanted to discuss the issue and no one spoke on the issue.

“Thank you, Mr. Bradford,” Gibson said. “We appreciate you and appreciate what you and EOC have been doing for our city and county.”