Governor: Virus cases down in 80% of Mississippi counties 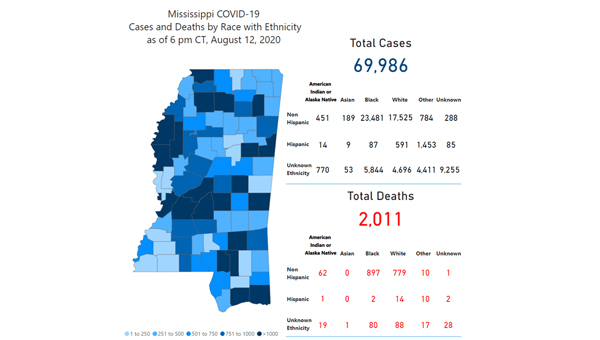 The Republican governor attributed the decrease to residents’ commitment to wearing masks and social distancing but also urged residents not to become complacent and to continue their efforts to slow the virus’ spread.

“The numbers are coming down, let’s be happy about that, but not let’s not rest,” Reeves said Thursday on Facebook Live. “Let’s not ignore it. Let’s fight and continue to crush this virus.”

Reeves said the state is seeing steady decreases in more than 70 counties in the state. However, he said “there’s more work to do” in six counties — Forrest, Jones, Lee, Union, Bolivar and Panola, where officials are still seeing a considerable number of positive cases.

He called on leaders in those counties to make sure that they enforce the statewide mask mandate and his executive orders, which limit crowd sizes and restaurant capacity.

The Mississippi State Department of Health reported 612 new confirmed cases and 22 deaths on Thursday, pushing the state’s total cases over the 2,000 mark, to 2,011.

Adams County’s numbers rose by five cases overnight to 647 total confirmed COVID-19 from 642 on Wednesday and the county’s death toll remains at 26. Adams County had 86 active COVID-19 cases on Monday, according to the Adams County Emergency Operations Center.

With the exception of Wednesday, when the Mississippi State Department of Health reported 1,081 new virus cases, officials have reported well under 1,000 new cases of the virus each day this week. That represents a change from the past several weeks where the state was averaging over 1,000 cases a day.

Wednesday was an outlier, a day in which officials also reported 45 deaths, one of the higher single-day death tolls the state has seen since the start of the pandemic.

Reeves said hospitalizations and deaths are a lagging indicator when it comes to measuring the spread of the virus now, because people who die from virus complications usually stay in the hospital for three to four weeks.

He added that now is the time for Mississippians to come together, regardless of political differences. He closed his remarks by saying “the virus doesn’t care who you voted for in the 2016 elections.”

The Health Department said Thursday that Mississippi, with a population of about 3 million, has had at least 69,986 reported cases of COVID-19 as of Tuesday evening.

Cumulative Cases and Deaths by County

Totals of all reported COVID-19 cases for 2020, including those in long-term care (LTC) facilities.

The numbers in this table are provisional. County case numbers and deaths may change as investigation finds new or additional information. The data provided below is the most current available.