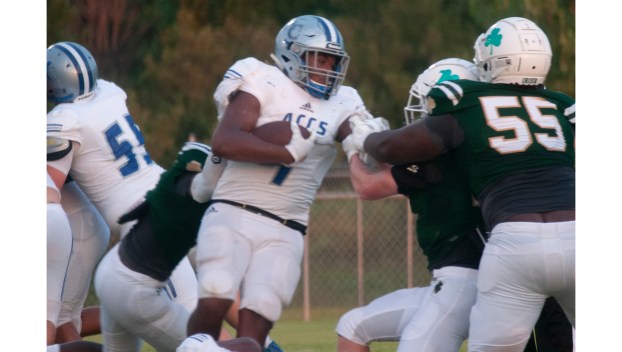 Claven Dunbar runs the ball for the Rebels in the game against St. Joseph Catholic School on Friday night. Courtesy Jon Alverson | The Delta Democrat-Times

GREENVILLE — The Adams County Christian School Rebels traveled to face a tough road opponent in the St. Joseph Catholic School Fighting Irish in Greenville on Friday night and despite a respectable effort came up short.

St. Joseph emerged the winner 50-20 at the end of a breathtaking game that included onside kicks and a successful 39-yard hail Mary touchdown pass by St. Joseph’s Quarterback Mekhi Norris with mere seconds left in the first half.

St. Joseph got on the board first when the Fighting Irish recovered an ACCS fumble and returned it 50 yards for a touchdown. Frank Serio was good with the PAT kick with 5:13 left in the first quarter.

ACCS reciprocated soon thereafter when Claven Dunbar scored on a 1-yard run. VJ Knight was good on the 2-point conversion and the score was 8-7 ACCS going into the second quarter.

Norris scored midway through the second quarter on a 5-yard run but Serio failed on the PAT.

With seven seconds left in the half, ACCS’s Dunbar scored on an 11-yard pass from VJ Knight but the 2-point conversion failed making the score 14-13, ACCS.

Halfway through the fourth quarter St. Joseph’s Kye Nelson scored on a 14-yard run and the snap on a point after kick went over kicker Jordan Jennings’ head but he was able to grab the ball and passed it for an impromptu successful 2-point conversion that was received by lineman Greg Fore.

ACCS’s last score of the game came with 3:35 left in the game when Tripp Cotten threw a 58-yard touchdown pass to Josh Credit. The 2-point conversion failed.

Washington School football comes from behind to defeat Centreville Academy

CENTREVILLE —  The Centreville Academy Tigers defense struggled in a 43-40 loss on Friday to the Washington School Generals. The... read more