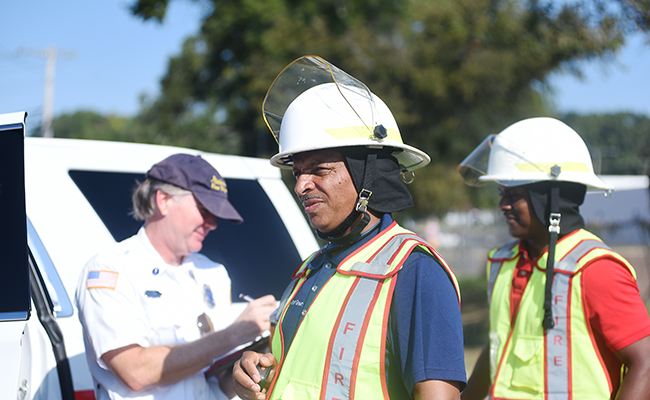 NATCHEZ — Natchez Fire Chief Ventris Green will be retiring at the end of the month, city officials recently announced.

The announcement, which came during Tuesday’s regularly scheduled meeting of the Natchez Mayor and Board of Aldermen, was a surprise to a few aldermen.

“This is my first time hearing … that Chief Green would be leaving us. I absolutely had no idea,” said Felicia Bridgewater Irving, ward 4 alderwoman. “Now that I know, Chief, I thank you for your years of service, for all of the accomplishments that you brought to the Natchez Fire Department, for motivating your employees to work there and wish you luck in all of your endeavors.”

Ward 2 Alderman Billie Joe Frazier said Green has been instrumental in improving the city’s fire protection rating during his time as chief in his last year with the department.

Green was appointed fire chief in March 2019 after having served as interim fire chief for six months. He has been a firefighter for more than 22 years.

“I would like to thank Chief Green, who has been very instrumental in bringing the fire department up to standard again,” Frazier said. “Chief Green is a man with not that many words but when he does speak he speaks loud and clear and lets you know where he stands. There have been many days when he has set me straight on a lot of things. I appreciate him not only as a chief but also as a friend.”

Ward 5 Alderman Ben Davis, who is chairman of the firefighter’s committee, said he would miss Green as fire chief.

“Chief Green was a good chief. We definitely will miss Chief Green,” Davis said. “He is one of the most loyal chiefs and most dedicated to this city. I could say a lot of things about him but he asked me not to say too much. I will say that we will miss him.”

Green said he was grateful for the opportunity.

“It’s been a great and fantastic run,” Green said to officials. “I’ve learned so much from you all, mayor and board, that I’m very appreciative of you. It’s hard leaving but I’m also excited to be going on with my other business interests. I ask you all to be praying for me and my family and I’ll be praying for you all to keep up the great work that you’ve been doing for the City of Natchez. It has been a great honor working for the Natchez Fire Department, which is the oldest fire department in the State of Mississippi.”

Green’s last day as Chief of the Natchez Fire Department is Aug. 31, Natchez Mayor Dan Gibson said, adding officials have only just begun the search for his replacement with no prospects.

“We are just now starting a search process and by the end of August we will be appointing an interim fire chief,” Gibson said.

Rebels roll to win over Rams