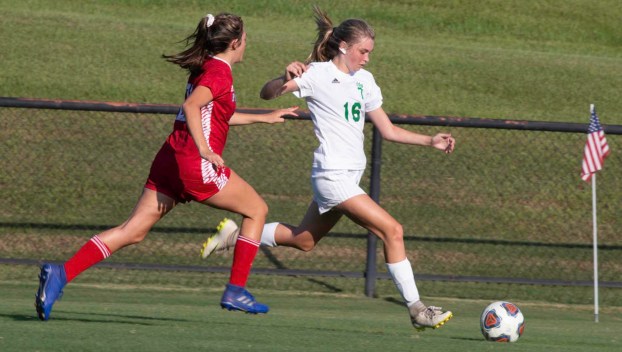 Cathedral’s Izzy Dupre’ shoots her third goal in a 8-0 shut out of Parklane Academy earlier in the season. Courtesy Bill Barksdale

Izzy Dupre’ led Cathedral with three goals scored in the match. Dupre’s third goal came as she was recovering the ball after a poor defensive clear by the Lady Lions in the second half to tie the match and send the match to PKs.

“Dupre’ had her back turned and she was able to fire a screaming shot that squeezed inside the goal post for her third goal,” said Dennis Hogue, Cathedral High soccer head coach. “I was super impressed in Izzy’s performance, she is our bread and butter and we expect that performance from her. She was our saving grace in the match with the game-tying goal.”

Cathedral’s Gracie Foster had one shot on goal and two assists in the match with one of the assists leading to Dupre’s second goal in the first half. Foster was able to split two Lady Lions’ defenders and passed the ball to Dupre’. Maddie Veruchhi scored a goal off of an assist from Mire in the second half.

Meredith Lesley, the goalkeeper for Cathedral, had 10 saves in the match, Hogue said.

“She has kept us in matches with her fantastic keeper play,” Hogue said. “She likes being in the field and understands being keeper is the best opportunity for the team to win.”

Cathedral (3-2) will play at 5:30 p.m. on Tuesday at Brookhaven Academy, a Midsouth Association of Independent Schools Class 4A Division 2 foe. Hogue said the Lady Green Wave will focus on being more accurate in trapping, passing and moving the ball at practices before Tuesday’s match.