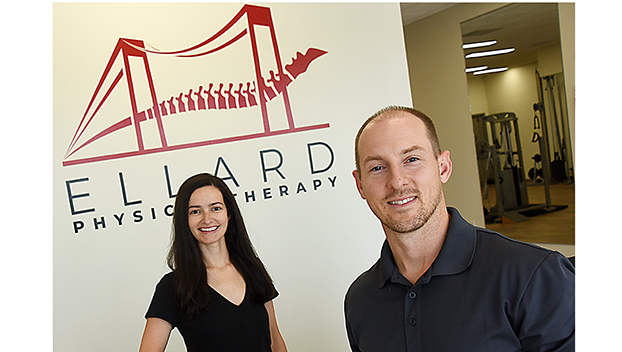 Andrew Ellard didn’t expect that he would move back to his hometown so soon.

Not until the pieces started falling into place, did Ellard recognize the opportunity to bring the cutting-edge physical therapy services he learned from some of the nation’s top clinics to the community in which he grew up.

Born and raised in Natchez, Andrew joked to his sister during a Christmas trip in 2019 that he was not moving back to Natchez anytime soon. Andrew and Ashlee enjoyed their life in Alabama with their then 1-year-old son, Beckett.

But a drive back from that holiday trip changed everything.

“We were kind of joking back and forth and then it started making sense,” Andrew said. “By the time we got back to Birmingham, we had decided we were going to do it. It all kind of fell into place.”

Now the couple is welcoming new patients into their new Natchez clinic.

Before moving to the area, both Andrew and Ashlee worked for ATI Physical Therapy in Birmingham, Alabama. The official physical therapy provider for the University of Alabama football team, ATI operates clinics across the country.

Previously, Andrew had the opportunity to work with Kevin Wilk at Champion Sports Medicine in Birmingham. In his career, Wilk has worked with numerous professional athletes, including Michael Jordan, Derek Jeter, Eli Manning and Drew Brees.

Both Andrew and Ashlee knew their physical therapy experience would be unique in Natchez.

“We knew we were at the cutting edge of physical therapy where we were,” Andrew said. “We knew if we came to Natchez we could bring some new services here.”

Two specialized services that the couple offers are a range of women’s health services and treatments for TMJ and other jaw conditions.

“You have to drive to Baton Rouge, Jackson or Monroe to get that sort of treatment,” Ashlee said.

With the opening of the new clinic, Andrew will also offer craniofacial and craniomandibular treatments to help with TMJ and pain associated with the jaw.

“This will really help our orthodontists and dentists here, who have to send patients to Jackson to get treatment — a treatment that you have to get twice a week.”

Andrew said he is also excited to offer sport medicine-based therapies to area athletes and schools.

“That is where most of our training is,” Andrew said. “I have a soft spot for (that area of physical therapy) because that is why I got into the profession to begin with.”

A former Mississippi State football player, Andrew tore up his knee in the last year of college, where a physical therapist helped get him back into playing condition.

“That is what put me on the physical therapy track,” Andrew said.

The Ellards are currently accepting new clients. In the State of Mississippi, patients have to have a referral from a physician, nurse practitioners, dentist or other medical professional to receive physical therapy.

After 12 years of being away from his hometown, Andrew said he is thrilled to be back.

“It is a dream come true for me to be back where I was born and raised and around all of the people I know,” Andrew said. “And to be able to help those people out who helped me out when I was growing up in Natchez.”

By SCOTT HAWKINS & SABRINA ROBERTSON NATCHEZ — Public and private schools in the Miss-Lou have had to get creative... read more