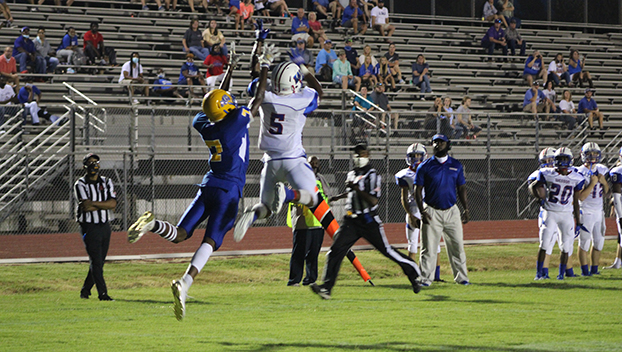 Natchez High’s DK McGruder and Wesson’s Jason Edwards battle for the football during last Friday’s game at Natchez High School. This week's game against Magee is canceled after a Magee player tested positive for COVID-19. (Patrick Murphy | The Natchez Democrat)

Sixty football players, 17 cheerleaders and eight members of the Magee High School coaching staff are quarantined for 14 days due to coming in contact with the player, according to a report from WAPT television news in Jackson.

Randy Craft, Natchez High head coach, said he was told on Tuesday night about the game being canceled and said now the Bulldogs do not have a game scheduled for Friday.

“This is a strange season,” Craft said. “We just have to be flexible and continue to be vigilant in what we are doing. We plan to watch film … on Friday.”

The two teams were set to play in the second week of football for the Mississippi High School Activities Association.

The Magee High Trojans (1-0) earned a 34-0 victory over the Collins High School Tigers while Natchez High (0-1) comes off a 34-20 opening night loss to Wesson Attendance Center in last Friday’s games.

The next game for Natchez High is at 7 p.m. next Friday against Vicksburg High School at Natchez High.