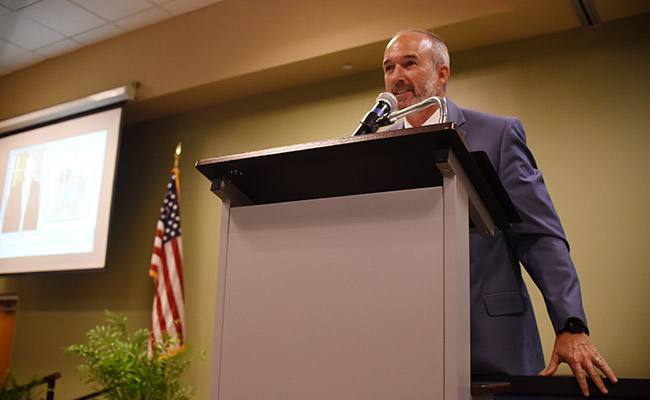 Whest Shirley, pictured here in a file photo, will not return as Concordia Parish Schools Superintendent in January after the school board voted not to renew his contract. (File photo, The Natchez Democrat)

VIDALIA — Concordia Parish School District Superintendent Whest Shirley will not be returning as superintendent after Dec. 31, after the school board did not renew his contract in a recent meeting.

Shirley began his tenure as the district superintendent in 2017 after he worked 10 years as an administrator and taught school in Vidalia for 22 years.

The Concordia Parish School Board passed motions not to extend Shirley’s contract and to issue a 90-day notice that the contract would not be renewed during a special-called board meeting on Aug. 24.

According to minutes of the Aug. 24 meeting, the board voted unanimously to enter into executive session to discuss the superintendent’s contract and came back into open session after approximately 45 minutes of discussion.

District 3A board member Rickey Raven then made the motion to extend Shirley’s contract until the end of the school-year and the motion was seconded by District 3B board member Lisette Forman.

The motion failed by a vote of 5-4 with board members Fred Butcher, Raymond Riley, Dorothy Parker, Derrick Carson and Angela Hayes all voting “no.” John Bostic, Warren Enterkin, Raven and Forman voted “yes.”

“It’s nothing that I have against Mr. Shirley, I just think that it’s the right thing for our district to move forward,” Riley said of his vote not to extend Shirley’s contract.

Butcher, who is the board president, declined to comment on why he voted against extending Shirley’s contract and said, “It’s a personnel matter.”

Butcher said to his knowledge the board did not have any other prospects for the next Superintendent.

“We have to review the job description and the salary,” Butcher said, adding he believes the board will begin the process of hiring a new Superintendent within 30 to 45 days.

Shirley said he had requested that the board extend his contract for another six months, which would allow him to finish out the school year as superintendent.

After December, Shirley said he might return to teaching or administration.

“I’m too young to retire,” Shirley said. “I might continue to teach or become an administrator, and just see wherever I land in January. I don’t really know yet. I’m only 53 and I’ve got to keep working. I’ve got the years but I don’t want to retire.”