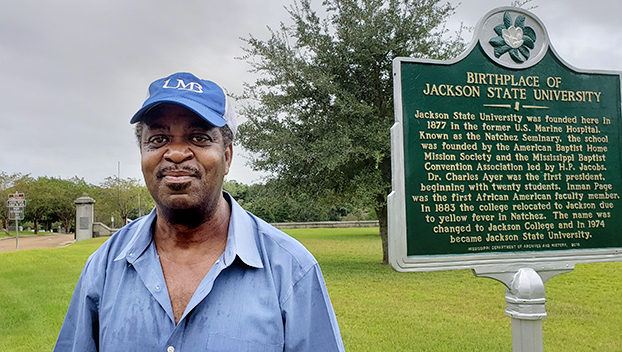 NATCHEZ — Sometimes a walk is more than just a walk.

Eugene Parker, formerly of Natchez, took a walk along Union Street Friday afternoon and did not turn around until he wound up at Marblestone Drive just off of Cemetery Road, he said.

That was where The Dart landed on Friday evening.

“Normally I’ll walk for 45 minutes and then turn around. This time I didn’t time myself so I don’t know how long I’ve been walking,” Parker said.

To Parker, his walk was a walk down memory lane to see what changed since he left Natchez to join the United States Air Force in 1972.

Later in 1992 Parker moved to Kansas with his wife to live near her family and worked for the United States Postal Service, he said.

Parker arrived back in Natchez earlier this month to find a permanent residence to make his second home, he said.

“This is home,” Parker said of Natchez. “I’ve been looking to see how it has changed and there are things that are gone. Houses. Trees.”

While on his walk, Parker said he took pictures of old buildings to send to his family back in Kansas. Parker also stopped at the Natchez National Cemetery to look at the headstones and pay his respects, he said.

“I’ll be here until November and then I’ll go back to Kansas for hunting season. My goal is to get me a place here and a place in Kansas. I want to be here for the hot months and there for the cold months. A hot Christmas — I just can’t picture that. To me Christmas is better when it’s snowing,” he said.

Parker said has never been bothered by heat after having spent many hot summers stationed by the military in areas like the dessert of Nevada and Hells Canyon, Idaho and Turkey.

Now that he is retired, Parker said he hopes to enjoy long summers in Natchez, he said.

“I love Natchez. Some people say there’s nothing to do here but it all depends on what you want to do. All I want to do is target practice, hunt and fish and I love to eat watermelon,” Parker said.