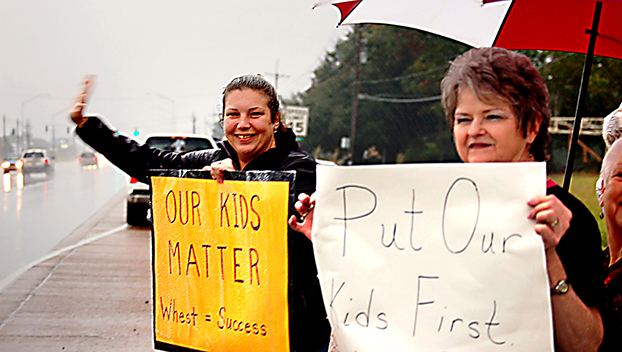 VIDALIA — Parents and grandparents of students in Concordia Parish showed up outside of a school board meeting Thursday to protest the board’s decision not to renew Concordia Parish School District Superintendent Whest Shirley’s contract.

While standing in the rain outside of the school district office, one of Shirley’s supporters, Alaina Bedson, held up a sign that read, “Our Kids Matter.”

Bedson and the group of a dozen or more protesters were greeted by horns honking from passing cars on the highway.

Shirley’s work contract expires at the end of December. Shirley said he asked the school board to extend his contract at least until the end of the 2021 school year and the board voted the motion down.

Bedson said she did not understand why the school district would let the superintendent’s contract expire in the middle of a school year and especially in a pandemic year no less.

“Why are we not reinstating his contract when we did not have test scores? There is absolutely nothing to grade him by. We’re in the middle of a pandemic,” Bedson said.

“We’re going to have to pull a principal from one of the schools to fill the office and make things run properly. Children are going to get hurt in the long run and that’s what we’re here to stop. Whest is the best for the job.”

Because of the COVID-19 Pandemic, the seating in the school board meeting was limited to the board members and essential personnel.

The school board allowed one person, Destiny Robb, to speak about extending Shirley’s contract at Thursday’s board meeting before moving on to other school business.

Robb said during Shirley’s tenure as Superintendent, he has shown his dedication to improving each of the schools in Concordia Parish.

Shirley’s response to the COVID-19 pandemic is also a testament to his ability to handle tough circumstances, Robb said.

“Mr. Shirley has experienced trials that we could not have fathomed before 2020. He has proven the power of effective leadership during these unprecedented times,” she said. “… we are asking that the School Board members reconsider renewing the contract of our Superintendent, Whest Shirley for the remainder of the school year before reevaluating the contract at that time.”

In response, School Board President Fred Butcher said that the board couldn’t discuss personnel matters in an open meeting.

“There shouldn’t be any discussion of his contract in this meeting because it is a personnel issue,” he said.

Butcher said the board might discuss Shirley’s contract again in executive session at a later board meeting.

However, protesters outside the meeting said they wanted an explanation of why Shirley’s contract was not extended.

“We would like to be given a reason other than ‘personnel issues’ because to me, I don’t see any personnel issues,” Bedson said. “He has done numerous things for Concordia Parish, for our schools for our children and for our parents. He has bent over backwards to make this a better community all around, not just within our school.”

Sue Wilson, another protester, agreed that school board needed to give them an explanation.

“We’re taxpayers and we deserve to know why,” Wilson said. “I have grandchildren here and my kids were raised in the Concordia Parish School system I’m a taxpayer here and I’m concerned.”

Shirley said he was not expecting the show of support he saw at Thursday’s board meeting or on social media.

“I’m flattered and humbled by all the text messages and social media responses and by all of the people who were there at the board meeting,” he said.

In other matters during Thursday’s Concordia Parish School Board meeting, the board voted unanimously to renew their 1% sales tax levy — which is equivalent to a 1-cent tax for each dollar spent — and to open an escrow account for the tax dollars designated for Concordia Parish.

Tom O’Neal, the school district business manager, said the separate bank account is legally required to separate the funds for Concordia Parish School District from the funds he manages for other school systems.

The board also discussed issues with students not longing in or completing work in virtual or hybrid classes this school year.

“We’ve knocked on doors and made phone calls,” he said. “We don’t know at this point whether the ‘no show’ students have moved and are enrolled in another school district.”

Shirley said district officials are discussing ways to help students recover class credits during the summer or on Saturdays to prevent them from failing the school year.