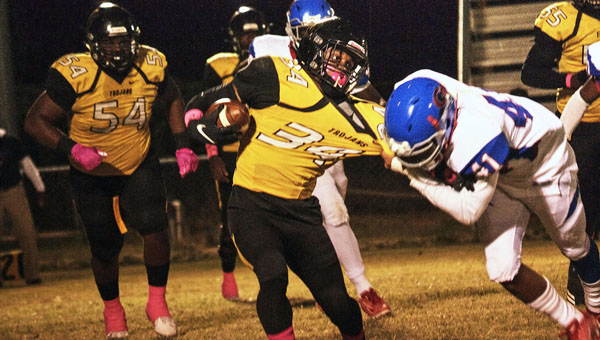 No. 34 Daminiya Milligan runs for a short gain as No. 54 Vincent Hollins looks on. (John Larson, Special to The Democrat)

FERRIDAY — A good General Trass High School team did its best to stay toe to toe with defending LHSAA Class 2A state champion Ferriday High School, but the Trojans had too much firepower for the Panthers to deal with.

Daminiya Milligan scored four total touchdowns, Jyron Milligan threw three touchdown passes with two of them to Elijah White, and Class 2A No. 1 Ferriday pulled away for a 62-20 win over upset-minded General Trass Friday Night at Melz Field to stay undefeated in LHSAA District 2-2A.

“Kids came out and played hard tonight. We played our kind of football,” Ferriday head coach Stanley Smith said. “Kids wanted the victory and they fought hard for it.”

The Panthers cut into the lead with about nine minutes left in the second quarter on an eight-yard touchdown run and two-point conversion run. That made it a 22-14 game and this looked like the makings of a really good game between two undefeated teams.

However, Ferriday would have other plans. Daminiya Milligan scored on a nine-yard run with about eight minutes left in the second quarter just moments after his 51-yard run gave the Trojans a 1st-and-goal at the Panthers’ 9-yard line.

Then Jyron Milligan connected with Kobe Johnson on a 53-yard touchdown pass and his two-point conversion pass to Dylan Boxley gave them a 36-14 lead with four minutes left until halftime.

The onslaught continued in the third quarter as Daminiya Milligan scored on a 43-yard run and Jaquarius Davis got in on the act with a five-yard TD run near the end of the quarter for a 48-14 Trojans’ lead.

General Trass (2-1, 1-1) scored on a touchdown run nearly midway through the fourth quarter to make it a 48-20 game, but the Trojans with an 80-yard kickoff return by Daminiya Milligan and a two-yard TD run late in the game.

“Donta Boxley stepped up defensively. When they got in the red zone a couple of times, they couldn’t get it in,” Smith said. “They’re scrappy. They’ve got a good team this year.”

While the offensive line showed signs of improvement, Smith said it still had some missed assignments that allowed the Panthers’ defense to get into the backfield a few times. He also said that the Trojans needs to clean up the penalties.

“We’ve got to have discipline and self-control,” Smith said.