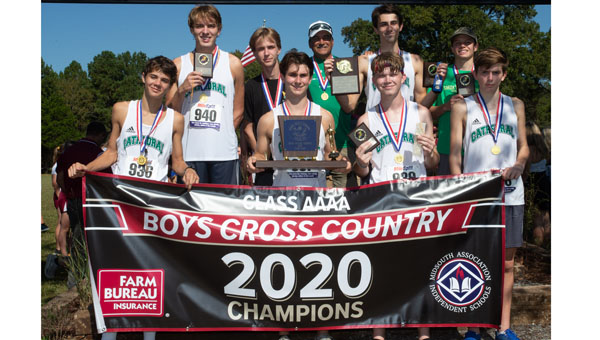 Senior Ryan Skates cruised to first place with a time of 17:28, out pacing his nearest opponent by 62 seconds.

Mississippi College spent the prior two months renovating the elite course in Clinton where both MAIS and MHSAA High schools compete.

“I had the opportunity to contribute to the new course design, so I had a few strategies that I shared with the guys, but this was the first time for us to ever run it,” said Tommy Smith, Cathedral cross country head coach.

Coach Smith estimated they might win 44 points but with 36 points, “They far exceeded my expectations, and I am so proud of how they responded to our training program.”

On the new course, the first 2,000 meters is downhill, which can give athletes a false sense of security.

“We did a high intensity warm up so that their bodies would be able to adjust when the hills came,” Smith said. “We have been so fortunate to have Ryan Skates on our team that we almost take his first-place finish for granted,” Smith said.

In addition to Skates, “The stand-out athlete of the race was Hartley Pyron, by far,” Smith said.

Pyron showed marked improvement in his speed over last year and also in his form.

“Hartley not only made the tangible commitment that he would run his best this year physically, but also he made a mental commitment to excellence,” Smith said.

Pyron said he worked for the opportunity.

“This year I worked on clearing my mind as I ran and believing more in myself because I knew I could do it,” Pyron said. “I knew this would be my last opportunity because I don’t plan on running at Mississippi State. So I decided to finish strong and do my very best to help the team.”